In another tweet, he attacked the BJP government at the Centre for not providing employment opportunities to people, alleging that the job crisis in the country is further deepening and the Modi government is doing nothing to resolve it. 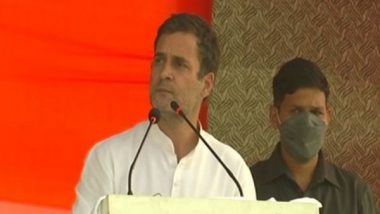 New Delhi, November 5: Ahead of the last phase of assembly elections in Bihar, Congress leader Rahul Gandhi promised on Thursday that a grand-alliance government will create "Naya Bihar" by bringing in industry, ensuring employment, waiving farm loans, reducing electricity tariff by half, and providing free education and justice to girls.

In an appeal to Bihar voters, Gandhi tweeted in Hindi, "Get ready, now the grand-alliance government will provide employment to you, waive loans of farmers, reduce power bill by half, provide free education and justice to girls, will clear obstacles in the progress of all classes, will set up trade and industry and will create Naya (new) Bihar," he said in a tweet in Hindi. Bihar Assembly Elections 2020: PM Narendra Modi Writes Letter to Voters, Says 'Need Nitish Kumar's Government So That Development Doesn't Stop'.

In another tweet, he attacked the BJP government at the Centre for not providing employment opportunities to people, alleging that the job crisis in the country is further deepening and the Modi government is doing nothing to resolve it.

"Lack of employment is a national crisis which is further deepening. The Modi government knows only to make hollow promises, not to resolve them," he said, while citing a news report that employment opportunities have further reduced in October.

The former Congress president also termed the boat tragedy in Bhagalpur as "very tragic" and urged Congress workers to provide all possible help. "The boat accident in Bhagalpur is very tragic. My condolences to the families of the deceased. The local administration is expected to quickly find and treat the missing passengers. I appeal to the Congress workers to do everything possible to provide all help possible," he said in yet another tweet in Hindi.

Polling in 71 and 94 constituencies, out of the 243 Assembly seats, was held in the first two phases on October 28 and November 3 respectively. The remaining 78 seats will go to polls on November 7 and the counting of votes will take place on November 10. The Congress is contesting the elections in alliance with the RJD and Left parties.