Along with Nitish, two senior BJP leaders - Tarkishore Prasad and Renue Devi - were expected to take oath as the Deputy Chief Ministers. Prasad was on Sunday chosen by the BJP as its Legislature Party leader, whereas, Renu was appointed as the Deputy Leader in the House. 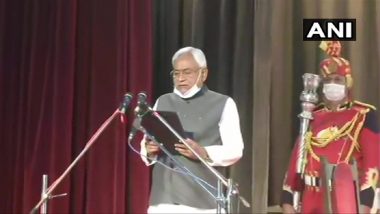 Patna, November 16: Janata Dal (United) president Nitish Kumar took oath as the Bihar Chief Minister for the seventh term on Monday. His swearing-in ceremony comes nearly a week after the results of high-stake assembly elections in Bihar were declared. The NDA, which was led by the JD(U)-BJP combine, had succeeded in retaining power by a slim majority.

Along with Nitish, two senior BJP leaders - Tarkishore Prasad and Renu Devi - took oath as the Deputy Chief Ministers. Prasad was on Sunday chosen by the BJP as its Legislature Party leader, whereas, Renu was appointed as the party's Deputy Leader of the House.

The elevation of Tarkishore also led to the exit of Sushil Modi, a "Nitish loyalist" who served as the Deputy CM for three separate terms between between 2005 and 2020. According to BJP insiders, the 68-year-old would be shortly inducted into the central government as a Union Minister.

The Rashtriya Janata Dal (RJD), which emerged as the single-largest party and has alleged EVM irregularities, decided to skip the oath-taking ceremony. The party spokespersons told reporters that they do not welcome the swearing-in of Nitish Kumar as the "mandate was against the NDA".

#WATCH: Nitish Kumar takes oath as the Chief Minister of Bihar for the seventh time - his fourth consecutive term. pic.twitter.com/5jcZXabSYw

This is the fourth consecutive term of Nitish Kumar as the CM. He first became the Chief Minister for a brief period in the year 2000, followed by a full five-year term between 2005 and 2010. He was re-elected and served as the CM from 2010 to 2014. In 2015, he returned again before the elections after his party demanded the replacement of then CM Jitan Ram Manjhi.

After the 2015 Bihar assembly elections, Nitish again succeeded to remain the CM -- this time from the support of Congress and the RJD. In 2017, he resigned to return as the Chief Minister on the very next day -- this time in alliance with erstwhile ally BJP.

In the poll results declared on November 10, the JD(U)'s electoral size shrunk to 43. The NDA, however, succeeded in winning as the BJP emerged victorious in 74 constituencies, followed by a victory of HAM(S) in 4 seats and VIP in 3. Cumulatively, the coalition bagged 125 seats -- three above the halfway majority mark.

Who Are The New Deputy CMs?

Renu Devi, a BJP legislator from Bettiah, is one the first Deputy Chief Minister. She had been winning the Bettiah constituency since 2000, barring a defeat in 2015 when Mahagathandhan bagged the seat. In this election, she succeeded in wresting back the vidhan sabha segment.

Tarkishore Prasad, the second Deputy CM, is a veteran grassroot leader of the BJP. He has succeeded in winning the crucial Katihar assembly seat in eastern Bihar consecutively since the year 2000. The polls held earlier this month marked his fifth consecutive victory from the seat.

(The above story first appeared on LatestLY on Nov 16, 2020 04:40 PM IST. For more news and updates on politics, world, sports, entertainment and lifestyle, log on to our website latestly.com).