Get latest articles and stories on India at LatestLY. Rajasthan government has taken a slew of measures to ensure higher coal availability for the power projects to deal with the power shortages amidst the festival season. 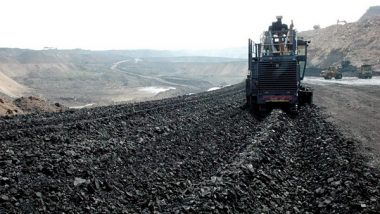 Jaipur (Rajasthan) [India], October 28 (ANI): Rajasthan government has taken a slew of measures to ensure higher coal availability for the power projects to deal with the power shortages amidst the festival season.

As per an official statement issued by the state government, besides managing relief from the centre in terms of higher coal supply from Coal India, Rajasthan also got the clearance from the Ministry of Forest and Environment (MoEF) granted for mining its coal blocks in Chhattisgarh.

Rajasthan government and Centre are working closely to improve power supply to the state that is gearing up to host tourists who could not make it during Diwali last year. After the number of states reported coal shortages, the Centre is trying to bridge the demand-supply gaps through various initiatives and working closely with the state governments, Indian Railways and Coal India.

Earlier on October 18, Rajasthan Chief Minister Ashok Gehlot had directed concerned officials to coordinate with the MoEF for the necessary clearances at the earliest to be able to start mining at Parsa Kanta captive coal block in Hasdeo Aranya region of Chhattisgarh. Following this, the ministry gave clearance to this long-pending request to ensure the energy security of Rajasthan.

Rajasthan government said it aims to reduce its dependence on its single largest source of coal, which is central PSU Coal India. With the opening of its new coal block in Chhattisgarh, Rajasthan will have direct access to its own coal in a time-bound manner.

"MoFE's clearance has come as a relief for the energy-starved state that heavily depends on the tourism sector, which has been facing headwinds on account of the COVID-19 pandemic. At the same time, the opening of new coal blocks will result in additional tax revenues for the Chhattisgarh government and job opportunities for the locals," said a government official.

In 2020-2021, Chhattisgarh reported 154 million tonnes of coal production, the highest in the country.

Rajasthan could cater only about 8,500-9,500 MW of electricity as against the demand of 12,500 MW in the past few weeks. Rajasthan's power distribution utilities had to resort to frequent power cuts even in urban areas on account of coal supplies, which triggered power shortages across the state. Rajasthan's per capita electricity consumption stood at 1282 units annually, which was a little higher than the national average of 1181 units in 2018-2019.

Rajasthan's Additional Chief Secretary Subodh Agarwal has been monitoring the coal and power supply situation with the utilities. He has directed power generation utilities to come up with firm plans to meet the electricity demand for the next three months.

In October, Coal India increased supply to Rajasthan which has now been able to ramp up power generation in the state. (ANI)