He also offered prayers at a dargah at Nampalli in the city before reaching Gandhi Bhavan. 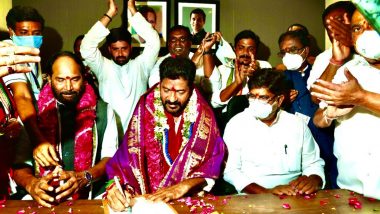 Hyderabad, July 7: Newly appointed Telangana PCC president Revanth Reddy took charge on Wednesday and urged party workers to work tirelessly over the next two years to defeat the ruling TRS and bring the Congress to power.

Reddy, Lok Sabha member from Malkajgiri, took charge from outgoing president N Uttam Kumar Reddy at Gandhi Bhavan, the state Congress headquarters, in the presence of AICC incharge of Congress affairs in Telangana, Manickam Tagore and a number of other senior leaders.

Hundreds of party workers thronged the venue on the occasion and later participated in a rally led by Revanth Reddy from the famous Peddamma temple here, where he offered worship in the morning. He also offered prayers at a dargah at Nampalli in the city before reaching Gandhi Bhavan. Congress Mocks New Governor Appointments, Asks 'Have They Changed West Bengal Governor?'.

Addressing the gathering, Revanth Reddy hit out at TRS president and Chief Minister K Chandrasekhar Rao for 'letting down' unemployed youth, farmers and also those who sacrificed their lives for the formation of Telangana. He urged party workers to work tirelessly for the next two years to defeat the TRS and bring the Congress to power. Assembly elections are due in Telangana in 2023.

Seeking to strike an emotional chord, he said it is the culture of Telangana people to remember somebody forever for providing just a glass of water to drink. He then went on to ask if it is not the responsibility of the people of Telangana to express their gratitude to Congress president Sonia Gandhi for realizing the decades-old dream of a separate state.

Revanth Reddy is known for his strong opposition to the ruling TRS and an aggressive style of functioning. With his appointment as the PCC leader in Telangana, he now faces the uphill task of rejuvenating the party in the state by taking on the ruling TRS, led by K Chandrasekhar Rao and an ambitious BJP.

Congress suffered successive electoral defeats in Telangana though the UPA government granted statehood to the region in 2014. Revanth Reddy, a popular leader in TDP before joining the Congress, rose through the ranks ever since he was elected as a Zilla Parishad Territorial Constituency (ZPTC) member in 2006, followed by his election to Legislative Council in 2007 and Legislative Assembly in 2009, 2014 and Lok Sabha in 2019.

In the wake of his appointment as PCC chief, he may come under attack from the ruling TRS as he faces allegations over his role in the so-called cash-for-vote scandal of 2015.