The tenure of controversial NCB Mumbai zonal director Sameer Wankhede with the federal anti-narcotics agency has ended and his services have been put at the disposal of his parent organisation DRI, officials said on Monday. 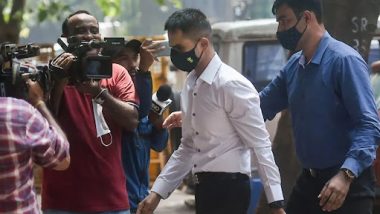 New Delhi, January 3: The tenure of controversial NCB Mumbai zonal director Sameer Wankhede with the federal anti-narcotics agency has ended and his services have been put at the disposal of his parent organisation DRI, officials said on Monday.

The charge of the NCB Mumbai zonal unit will be handled in an additional capacity by its Indore zonal director Brijendra Chowdhary. Also Read | Moto G71 Tipped To Debut in India Next Week: Report.

Wankhede, an Indian Revenue Service (IRS) officer of the 2008 batch, was sent to the Narcotics Control Bureau (NCB) Mumbai zone in August, 2020 "on loan" from the Directorate of Revenue Intelligence (DRI) in the wake of the drugs probe being conducted by the agency into the death of 34-year-old actor Sushant Singh Rajput. Also Read | Pune Shocker: Pedestrian Bludgeoned to Death by Two Minors After He Confronts Them Over Rash Driving.

He had been serving as the head or the zonal director of the NCB Mumbai unit since August 31, 2020 and was given some extensions.

Wankhede's extended tenure with the NCB ended on December 31, 2021 and as there has been no order for his extension, he has been sent back to his parent organisation DRI, that functions as an investigation agency under the Central Board of Indirect Taxes and Customs (CBIC), they said.

Wankhede has been in the limelight following the high-profile October, 2021 raids by the NCB on a Mumbai cruise after which the agency arrested Aryan Khan, the son of actor Shah Rukh Khan, and several others and claimed to have siezed some narcotics too.

Soon after this action, Maharashtra minister and NCP leader levelled multiple charges of alleged misconduct and corruption against the officer. Wankhede has denied the allegations.

The NCB, under Wankhede, had earlier arrested Malik's son-in-law Sameer Khan in a narcotics case and the agency has recently moved the Bombay High Court to cancel the bail given to the latter in this case.