Get latest articles and stories on India at LatestLY. The Supreme Court on Tuesday extended till August 28 the deadline for demolition of Supertech's twin 40-storey towers in its Emerald project in Noida, Uttar Pradesh. 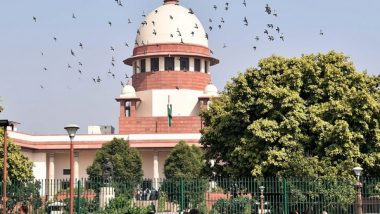 New Delhi [India], May 17 (ANI): The Supreme Court on Tuesday extended till August 28 the deadline for demolition of Supertech's twin 40-storey towers in its Emerald project in Noida, Uttar Pradesh.

The earlier date fixed to demolish the towers, which have been held illegal for a violation of norms, was May 22, 2022.

The application for an extension of time to demolish the towers filed by Interim Resolution Professional (IRP) for Supertech said that after the test blast conducted by the Edifice Engineering it was found that the structure was stronger and more stable than it was expected.

IRP was appointed superseding the board of Supertech Ltd. by the NCLT while hearing a petition filed by the Union Bank of India against the real estate major for non-payment of dues worth around Rs 432 crore.

Amicus curiae advocate Gaurav Agrawal also supported the application and said that even agency CBRI (Central Building Research Institute) which has been appointed by the top court to oversee the demolition exercise has also approved the extension of time.

Granting an extension of time the bench sought a status report.

The apex court bench was earlier this year was informed that by May 22 towers will be demolished and on August 22 the entire debris would be removed from the site and the site will be completely cleared by M/S Edifice.

On or before May 22, the twin towers would be demolished and only in the event of unforeseen events, the dates can be changed, but that would be done after receiving prior approval from the court, the top court was further informed.

On February 7, the top court had asked the CEO, Noida to take necessary steps and to commence within two weeks the demolition of Supertech's twin towers in Noida.

Before that, the bench had asked Supertech Ltd to execute a contract within a week with a company to demolish its twin towers.

The top court was told by the Noida authority that Edifice Engineering has been chosen to carry out the demolition of the twin towers in consultation with the Central Building Research Institute (CBRI) Roorkee.

The apex court had earlier dismissed a plea of Supertech seeking modification of its August 31, 2021 order by which it was directed to demolish two of its 40-storey towers at its Emerald Court housing project.

While directing the demolition of two towers over grave violations of building norms, the top court had said that it was a result of "nefarious complicity" between Noida Authority and the Supertech and ordered that company shall carry out the demolition at its own expense within three months under the supervision of the Noida Authority and an expert body like the Central Building Research Institute.

The order had come on a batch of petitions filed by homebuyers for and against the April 11, 2014 verdict of the Allahabad High Court, which had ordered the demolition of the two buildings within four months and the refund of money to apartment buyers. (ANI)