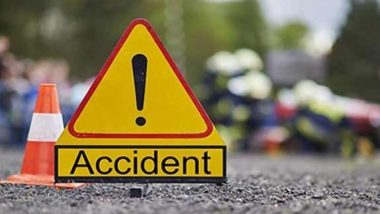 Balrampur, May 21: Six members of a marriage party were killed and three others injured in a head-on collision between an SUV and a tractor-trolley on the Tulsipur-Barhni National Highway here, police said on Saturday.

The accident took place near Ganwaria trisection late on Friday when the victims were travelling from Laxmanpur to Bhagwanpur in Gasadi police station area, Balrampur Superintendent of Police Rajesh Kumar Saxena said .

Injured Shiv Prasad (52) and Durga Prasad (26) have been admitted to the district hospital. Another person named Umesh (13), whose condition is critical, has been referred to a hospital in Lucknow, the SP said, adding that the bodies have been sent for post-mortem and legal action is being taken.