Get latest articles and stories on India at LatestLY. The special cell of Delhi Police arrested a gangster after a brief encounter in South Delhi's Pushp Vihar area on Saturday night. 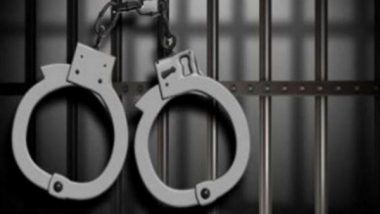 Accused Sunil Raj alias Kala is an active member of the Shakti Naidu gang and has been booked under the stringent MCOCA Act.

The police said that the arrested accused Sunil is a dreaded gangster, and had been previously arrested in connection with more than 10 cases of heinous crimes including two murders and five attempts to murder, one of MCOCA and others of assault on police and judges, hurt, criminal intimidation, robbery, riots, arms act in Delhi during the last 10 years.

"Team of Special Cell got a tip-off that Sunil would be coming on a two-wheeler to the Asian market, adjoining the CRPF camp boundary, to meet one of his associates on Saturday evening. A team was formed and they laid a trap," said police.

"Sunil was spotted and he was asked to surrender, but he did not stop and fired two rounds at police personnel. Police also fired in self-defense in which Sunil Raj was injured in his left leg. He was taken to Safdarjung Hospital, where he is undergoing treatment," the police said, adding that a total of three rounds were fired from both sides.

A case under appropriate sections of the law is being registered in this regard.

Earlier, Sunil Raj had assaulted three judges sitting in a car during a road rage in the area of Ambedkar Nagar Police Station in the year 2012. He was convicted in that case.

The Police further said that Sunil with his associates is also involved in sensational six shootouts in Delhi resulting in two murders and injuries in other four cases.

DCP Special Cell Jasmeet Singh said that presently, he was working for Rohit Chaudhary, Ravi Gangwal gang in the area of south Delhi in demanding extortion, collecting money from satta operators, builders, realtors, and the property dealers at behest of their gang leaders.

In order to curb the criminal activities of Sunil Raj and other members of the gang, he along with others including his own brother Anil Raj and kingpin Ravi Gangwal were booked in a case FIR under MCOCA registered in PS Ambedkar Nagar in the year 2018. (ANI)