A businessman and his three accomplices were arrested on Thursday allegedly for manhandling a police home guard and holding him hostage in Patancheru of Telangana's Sangareddy district, informed the police. 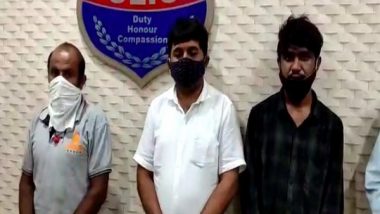 A businessman and his accomplices were arrested for thrashing a home guard and holding him hostage in Sagareddy on Thursday.

Sangareddy (Telangana) [India], June 11 (ANI): A businessman and his three accomplices were arrested on Thursday allegedly for manhandling a police home guard and holding him hostage in Patancheru of Telangana's Sangareddy district, informed the police.

According to the police, the incident took place when Kanakiah, a home guard had gone to serve notices to a businessman in Patancheru related to a case. He was thrashed and later was held hostage.

Home Guard Kanakiah was caught by four men who threw away his ID card and phone ignoring the fact that he was a police personnel and thrashed him, said the police.

Later, the Patancheru police arrived at the spot and arrested the businessman, Devilal, along with his three accomplices.

"Bachupally Home Guard Kanakaiah had come to Patancheru to serve notices to a person who was involved in a case. Devilal Gupta who is the owner of the furniture shop owner and his three employees manhandled Kanakaiah knowing the fact that he's police personal and held him hostage in a room," Patancheru Circle Inspector said.

"Immediately after receiving the information, we reached the spot and rescued the home guard and took the accused persons into custody," he added.

A case has been registered under the relevant sections of the law against the accused who have been sent to judicial remand. (ANI)