Get latest articles and stories on India at LatestLY. In a joint operation on Saturday, the Odisha Police conducted a raid and seized more than 3 kilogram of brown sugar worth Rs 3 crore at Mangalaghat Chakka in Puri. 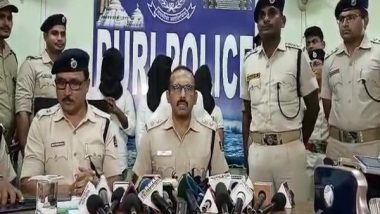 Puri (Odisha) [India], May 15 (ANI): In a joint operation on Saturday, the Odisha Police conducted a raid and seized more than 3 kilogram of brown sugar worth Rs 3 crore at Mangalaghat Chakka in Puri.

The police have arrested three persons involved in the case.

According to the police, the operation by Odisha Police and Special Task Force was led by acting on a specific input. With the conduct of the raid, they busted illegal narcotics and seized 3.192Kg of brown sugar from the possession of three persons, identified as Susanta Patnaik alias Nanda, Raj Kishore Sahoo, and Manas Sahoo have been arrested.

"Based on the investigation, it was found that the three were inter-district suppliers, amongst one kingpin namely Susanta Patnaik is arrested," said Kanwar Vishal Singh, Superintendent of Puri Police.

Besides the drugs, the police have also seized Rs 20,000 cash, four mobile phones, one currency counting machine, and one grey-coloured car from their possession.

The SP also mentioned that three police teams, each headed by a DSP rank official will be taking the case ahead for further investigation.

He also mentioned that this has been the biggest seizure of Brown Sugar by the Puri police, so far.