Get latest articles and stories on India at LatestLY. Bharatiya Janata Party (BJP) National President Jagat Prakash Nadda on Saturday conducted a door-to-door campaign in Uttar Pradesh's Bareilly, ahead of Assembly elections in the state. 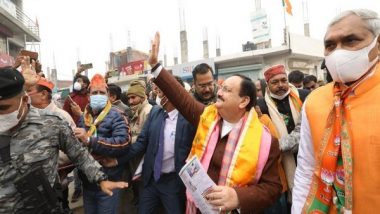 "Did a door-to-door campaign in Bhojipura Vidhan Sabha, Bareilly today. The abundant blessings received from the people is a testimony to the fact that due to the welfare policies of the BJP, our government is going to be formed again here with a grand victory," Nadda tweeted (rougly translated from Hindi).

He also addressed "Prabhavi Matdata Samvad" at Gandhi Auditorium in Shahjahanpur and said Zardozi work is being encouraged under the Yogi government's 'One District-One Product' scheme here.

Nadda had also convened an organizational meet in the Shahjahanpur district yesterday.

The counting of votes will take place on March 10. (ANI)