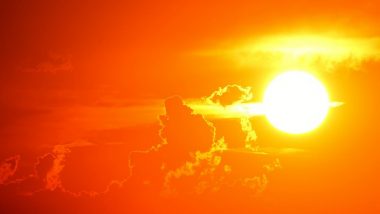 New Delhi, May 2: Intense heat wave conditions prevailed in various parts of Rajasthan including Ajmer, Bikaner, Jodhpur and Kota divisions. MeT officials said Jaisalmer was the hottest place in the state with 46.5 degrees Celsius, followed by Churu with 46.4 and Bikaner with 46.2 degrees Celsius. A thunderstorm with very light rain also occurred at isolated places in Jaipur, Bikaner, Kota and Ajmer divisions in the last 24 hours.

According to the MeT department, heat wave conditions are likely to prevail over parts of West Rajasthan and Vidarbha during next five days and at one or two pockets over northern parts of Madhya Maharashtra and Marathwada. People were seen taking ice creams and cold-drinks in Gujarat's Ahmedabad to beat the heat as the temperature rose across the nation. In Punjab's Ludhiana, people covered their heads and faces to shield themselves from heat as the mercury rises across the nation. "Temperature to go above 40 degrees Celsius in coming days. It's likely to go down on May 2 and 3, some places will receive light showers," India Meteorological Department said.