James Gunn Reveals His Favourite Bollywood Film and It Stars Aamir Khan in the Lead! Any Guesses?

Popular Hollywood director James Gunn, who is known for helming films like The Suicide Squad, Guardians of the Galaxy and others, recently revealed his favourite Bollywood film, and it stars superstar Aamir Khan. 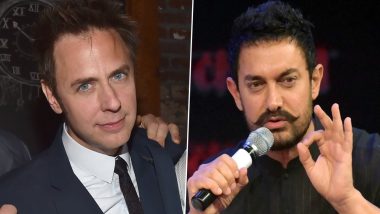 Popular Hollywood director James Gunn, who is known for helming films like The Suicide Squad, Guardians of the Galaxy and others, recently revealed his favourite Bollywood film, and it stars superstar Aamir Khan. James was responding to the tweets of his fans on Tuesday when one fan asked him if he watches Indian movies. To this, he replied that he watches many Indian movies and his favourite one is 'Lagaan'. The Suicide Squad ‘Rebellion’ Trailer: From a Shirtless John Cena to More King Shark Shenanigans, Exciting New Footage Revealed From James Gunn’s DC Film (Watch Video).

In a recent interaction on Twitter, a fan asked "Do you see any Indian movies sir?" Replying to him James said, "Many. Lagaan is probably my favourite."

The reply from the filmmaker excited several Bollywood lovers as 'Lagaan' holds a special place in the hearts of many Indians. The 2001 film was one of the most successful ones in the history of Indian cinema. The Suicide Squad Trailer: James Gunn’s Supervillain Flick Sees a Monster Plot With Crazy Weird Characters (Watch Video).

It was even nominated for Oscars in the year 2002 under the Best Foreign Language Film category, though it couldn't make the cut. The Ashutosh Gowariker directorial, apart from Aamir, also featured Gracy Singh, Rachel Shelley and Paul Blackthorne in lead roles. The film was produced by Aamir under his banner Aamir Khan Productions.

Recently, the 50-year-old director had revealed that he has completed 'The Suicide Squad', including its VFX and all the post-production work. The movie is slated to release on August 6 this year in theatres and HBO MAX. James enjoys a huge fan following in India and his upcoming superhero movie 'The Suicide Squad' is one of the most awaited along with 'Guardians Of The Galaxy Vol 3'.