The first place holder will receive Galaxy Watch 4 Classic. Second and third runner-ups will get a pair of Galaxy Buds Pro each. January 31 is the deadline of submission. The first round will be evaluated from February 2 to 10 and the second round from February 14 to 20. 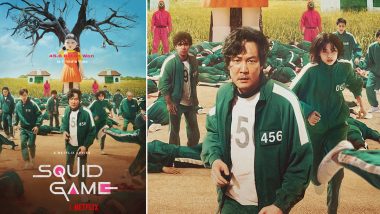 The Korean Cultural Centre India (KCCI) on Monday announced a two-round contest along the lines of the superhit Korean-language series "Squid Game" as its first event of the New Year 2022. As the COVID-19 pandemic has forced people to remain indoors, the KCCI is encouraging them to enjoy their time at home with physical activities. Squid Game’s Lee Jung-jae Happily Poses With Hollywood Legend Leonardo DiCaprio in This Viral Pic!

"Squid Game", a Netflix survival drama which was released in September 2021, revolves around hundreds of cash-strapped contestants who accept an invitation to compete in children's games for a tempting prize, but the stakes are deadly. Directed by Hwang Dong-hyuk, the show saw a group of masked staff in pink jumpsuits arrive and explain tasks to the players in green tracksuits who will be given 45.6 billion won (USD 38.3 million) in prize money if they can win six games over six days. Squid Game, Hwang Dong-hyuk’s Netflix Show, Wins Breakthrough Series At Gotham Awards 2021.

The six games were -- Red Light, Green Light; carving a shape out from a dalgona candy using a pin; a deadly tug of war; marble game; crossing a two-panel wide bridge, where the panels were made of either tempered or regular glass, and the final titular Squid Game. Hwang Il-yong, director of the KCCI, said amid the recent third wave of Covid 19, the centre wanted to provide online platform where people can communicate and exchange their feelings with each other, so they came up with this contest as "small encouraging gift".

"'Squid Game' was a mega hit content through the whole world not only in India. However, I could see unextinguished fever of it even now in India and there have been many demands and requests to hold this event at our centre or at our event," the director said in a statement. A spokesperson for the KCCI said that participants can play some of the games that were played in "Squid Game" or enact the basic survival drama premise of the hit Netflix series. They can record the game as a video or do a photo shoot with "Squid Game" as a concept. They are free to interpret the games in any format as per their creativity.

Those interested in participating in the competition can mail their entries at registerkccindia@gmail.com, with 'K-Insider Challenge' as subject and Squid Game Challenge, followed by their name. To qualify in the first round, the number of “views” & “likes, comments & shares” and evaluation by the KCCI management will bear 50 per cent of weightage each. Only 10 participants will make it to the second and final round, where the winner will be judged on the basis of the number of “views” & “likes, comments & shares” only.

The first place holder will receive Galaxy Watch 4 Classic. Second and third runner-ups will get a pair of Galaxy Buds Pro each. January 31 is the deadline of submission. The first round will be evaluated from February 2 to 10 and the second round from February 14 to 20. All participants' entries will be posted and evaluated on KCCI's social media platforms – Facebook, Instagram, YouTube, Twitter and Koo. Only one entry is accepted per one person. Maximum limit for a video entry is 10 minutes.