Gurupurab 2021: Guru Nanak Dev Ji's Teachings That Will Change the Way You Look at Life

Guru Nanak Jayanti, also known as 'Gurupurab', 'Guru Nanak Dev Prakash Purab' or 'Guru Nanak Aagman Divas', has just arrived. It will be celebrated on November 19 this year and is considered one of the most important festivals in Sikhism. 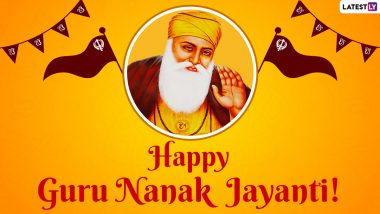 New Delhi, November 18: Guru Nanak Jayanti, also known as 'Gurupurab', 'Guru Nanak Dev Prakash Purab' or 'Guru Nanak Aagman Divas', has just arrived. It will be celebrated on November 19 this year and is considered one of the most important festivals in Sikhism. The day marks the birth of Sri Guru Nanak Dev, who laid the foundation of Sikhism. Born in 1469 in Talwandi, Pakistan, Sri Guru Nanak Dev spread the message of 'Ik Onkar', meaning 'One God' who dwells in every one of his creations and constitutes the eternal truth.

'Ik Onkar' is the first word of the mool mantra and is considered the most important component in Sikhism. The mool mantra is also significant because it is the opening text of the holy Sri Guru Granth Sahib, which contains the composition and bani of all the ten Sikh Gurus. The mool mantra given by Sri Guru Nanak Dev is: "Ik Onkar, Satnam, Karta Purakh, Nirbhau, Nirvair, Akal Murat, Ajuni Sae Bham, Guru Prasad." Happy Guru Nanak Jayanti 2021 Greetings: HD Images, WhatsApp Messages, Wallpapers and Quotes To Celebrate Guru Nanak Dev Ji’s Birthday.

This means: There's only one God, his name is the only truth, he is the only creator, he is fearless, he is without hate, he is immortal, he is beyond birth and death, and by only his grace one can chant his name. The sacred scripture Sri Guru Granth Sahib Ji has all of the teachings given by Sri Guru Nanak Dev. Here we have listed 5 of his many teachings that will change your perspective towards life:

1. Vaand Chhako: Sharing whatever God has given you with others and helping those who are in need is what Sri Guru Nanak Dev Ji preached all his life. This is one of the principles of Sikhism. He said, with the grace of the Lord, whatever you have received, share it with the needy and then consume.

2. Kirat Karo: Means, make a living honestly. One should not exploit others to enjoy self-happiness. Earning without fraud and working diligently is what he preached.

He said that despite religion, caste, and gender, everyone should seek well for others and only then one can have that goodness back in return. At the end of daily Ardaas prayer, it is said, "Nanak Naam Chardi Kala Tere Bhane Sarbat da bhala", which means "Nanak with your name and blessings, may everyone in the world prosper and be in peace."

With this prayer, one requests the Lord for the welfare of the whole humanity and not just of our community or our family alone.

Sri Guru Nanak Dev also laid great emphasis on having the importance of Guru in one's life. He said without a true Guru, one can never find God.

According to him, salvation occurs from the heart, spirit and soul and not from the pilgrimage. Guru according to him is the voice of God, the true source of knowledge and salvation, who without any discrimination shows the path of truth and enlightenment.

Guru Nanak never believed in a 'Trinity of Gods', or the belief that God can be born in human form. In Sikhism, he tried to harmonise both Hinduism and Islam. He never believed in superstitions, caste distinctions and rituals.

His words are enshrined in Sri Guru Granth Sahib, the Holy Scripture.

Many of Sri Guru Nanak's Shabads (hymns), which form a part of the Sri Guru Granth Sahib, reflect clearly how the sight of God and his love itself is supreme.