Roberto Mancini Determined to Rekindle Italy's Love Affair with Football, His First Match with Poland as a Coach

Roberto Mancini takes charge of his first competitive game as Italy coach in Friday's Nations League opener against Poland in Bologna with the tough task of rekindling the nation's love affair with their national side, decimated after the low of their World Cup fiasco. 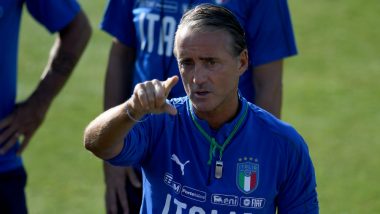 Milan, Sep 6: Roberto Mancini takes charge of his first competitive game as Italy coach in Friday's Nations League opener against Poland in Bologna with the tough task of rekindling the nation's love affair with their national side, decimated after the low of their World Cup fiasco.

The former Inter Milan and Manchester City boss were appointed in May after the four-time winners' shock failure to qualify for the World Cup for the first time since 1958.

Mancini's job will be to rebuild a new and vibrant side going into the European Championship in two years' time and heading towards the 2022 World Cup in Qatar.

The Nations League -- in which Italy will also be up against European champions Portugal in Group 3 -- will have an impact on seeding for Euro 2020.

And the 53-year-old has insisted that a key to his strategy was to bring in new blood after the departure of several veterans, including iconic goalkeeper Gianluigi Buffon, in the wake of Italy's World Cup play-off defeat to Sweden last November.

"We're determined to bring Italian football back where it deserves to be. It's our duty." Italy has plummeted to an all-time low of 21st in the FIFA rankings.

They were eliminated in the group stage at the 2010 and 2014 World Cups, although they fared better at the European Championship, reaching the final in 2012 and the quarter-finals in 2016.

But Mancini said he wanted to "try something different" and focus on youth, with four uncapped players including Roma's Nicolo Zaniolo, who is 19 and has yet to start in a Serie A game.

Italy's under-21 side reached the semi-finals of the 2017 UEFA Under-21 Championship, while the under-20s finished third at the FIFA U-20 World Cup in 2017. And Mancini called on the coaches of Serie A squads to give younger players more playing time to build on this potential.

"There have never been fewer Italians playing the game," said Mancini. "Our use of Italians has never been so low, so we have to try something different. That's why I've called up certain players," he said.

"We're trying to send a strong message from Coverciano. We're convinced that those who play well at youth level can do so even at a higher level. "At this historic moment, there are not many Italian players playing on a consistent basis. Because of this, we have included many young players to increase the number of players so we can get to know them better." One of Mancini's first decisions on being appointed last May was also to recall controversial striker Mario Balotelli, for the first time since the 2014 World Cup.

The Nice striker scored in his first game -- a 2-1 friendly win over Saudi Arabia -- but Mancini's next two friendlies were a 3-1 defeat to World Cup winners France and 1-1 draw with the Netherlands.

Veteran Juventus defender Giorgio Chiellini, 34, returns to the squad for the first time since Italy's World Cup play-off defeat. Poland, unlike Italy, was at the World Cup but were eliminated in the group stage, and have attacking quality in Bayern forward Robert Lewandowski and Napoli striker Arkadiusz Milik. After Poland, Italy plays Portugal -- competing without superstar Cristiano Ronaldo -- in Lisbon on September 10.