Months after keeping their romance under wraps, PD square has finally made their relationship official as they were photographed for the first time looking cosy while strolling on the streets of the UK together. 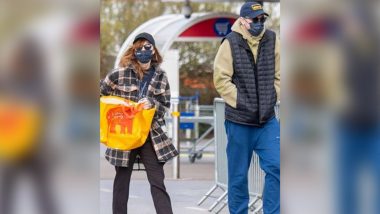 Months after keeping their romance under wraps, PD square has finally made their relationship official as they were photographed for the first time looking cosy while strolling on the streets of the UK together. E! News reported that the 'Saturday Night Live' star who fled to meet his lady love in his country was seen hugging and walking with her on a grassy knoll in the English countryside on Sunday (local time). As seen in the viral candid photos, the couple was all smiles even after the paparazzi caught them. Pete Davidson Will Visit Girlfriend Phoebe Dynevor in London to Spend Some Quality Time With the Bridgerton Star.

The couple has not made their romance official on their social media handles yet, but these pictures are seen as a confirmation from them to their fans. In the snaps, the two actors are seen dressed casually. Phoebe sported a blue and white patterned jacket, paired with grey sweatpants, a grey baseball cap, sunglasses and black slip-on shoes. Pete wore an olive green hoodie with the hood on over a black baseball cap, blue sweatpants and blue and white sneakers and held a cigarette in his hand. Bridgerton Actress Phoebe Dynevor Confirms Dating Pete Davidson.

The sources informed E! News that the 'Bridgeton' star and the 'King of Staten Island' star were spotted visiting a supermarket in the greater Manchester area, before their stroll. Pete was photographed arriving at Heathrow Airport in London on Thursday, April 22 (local time). People Magazine reported on Friday, that Pete was visiting the Younger actress in London during SNL's latest schedule. A source said the duo is "really into each other," adding that "Pete is telling friends he is serious about her."

The dating rumours of the two stars sparked later in March when the duo was spotted "holding hands and hugging each other" in a toy town English village by a local schoolgirl. After being spotted in the UK together, Phoebe fled to New York City, to meet Davidson who currently lives and shoots Saturday Night Live there. Pete reignited the dating rumours, in mid-April while participating in a Zoom Q and A with Marquette University students, where he was asked who he considered being his celebrity crush, to which he smiled and replied: "I am with my celebrity crush."

Additionally, they have also seen sporting matching silver necklaces with their shared initials, 'PD', in recent days. Pete recently appeared on Jimmy Fallon's 'The Tonight Show' where he was seen in a grey coloured crew neck t-shirt and ripped jeans. What made his appearance an eyebrow-raiser to fans and media was his monogrammed necklace. Phoebe has reportedly worn the same piece of jewellery multiple times, including in a recent YouTube Q and A.

Meanwhile, on the work front, the 25-year-old actor Phoebe is set to begin filming season two of 'Bridgerton' this spring, after Netflix renewed the romance series through season four.Besides this, Phoebe is currently filming the new drama 'The Colour Room,' in which she plays Clarice Cliff, a pioneering ceramic artist from the 1920s. The Netflix star had previously spent time in New York, where Davidson lives, in early February. She was there to film for her role on the hit show 'Younger.'