Indian national football head coach Igor Stimac said that starting promotion from the I-League to the Indian Super League will initiate the process where the Indian leagues become longer. He also said that it will give more matches to the players to show their capabilities on the pitch. 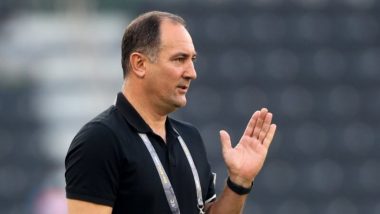 New Delhi, Nov 11: Starting promotion from the Hero I-League to the Hero Indian Super League will initiate the process where the Indian leagues become longer, and hence, gives more matches to the players to show their capabilities on the pitch, believes India senior men's national team head coach Igor Stimac. It was earlier announced that the Roadmap for Indian Football, as approved by the Asian Football Confederation in October 2019, after consultations with the Hero ISL and Hero I-League clubs, the AIFF and its marketing partners, will be followed. As per the Roadmap, the winners of the 2022-23 and 2023-24 Hero I-League seasons will stand a chance to gain promotion to the Hero ISL without any participation fee, basis fulfilment of the club licensing criteria.FIFA World Cup 2022: Cristiano Ronaldo to Spearhead Portugal for the Fifth Time

Speaking on the Roadmap that lays ahead for Indian Football, Stimac opined, "I am very happy about this. We have finally been successful in convincing everyone about the importance of promotion from the I-League to the ISL, and that's a big step. It will bring something very important to our league system - competitiveness, and it will bring something the I-League clubs will have to fight for. I also can't wait for the time when the relegation starts as well, because the competitiveness will be present at that level too. It will bring more pace and intensity to such games," said Stimac.

The Blue Tigers gaffer also feels that though it may take a couple of years for the Hero ISL to expand to include more number of clubs, the step will be an important one. "Yes, we need to wait a couple of years for it to happen, but the league will finally become what it needs to be in regards to the size, the number of clubs and so on," he said. "That will be really good for football in India, as the players will get more matches, and we as National Team coaches will get to see them in action more, before we make the decision on who to call up."

Stimac, who is currently in Croatia, also mentioned that he will be following the fortunes of the Hero I-League clubs closely. "The last two years have been difficult for players in both the leagues, with the bio-bubble. But I would like to tell all the players in the I-League that you can now enjoy the football that you play and express yourselves. We are going to follow you closely," said Stimac. "The AFC Asian Cup is not too far away, and as long as you hold an Indian passport, you stand a chance to play for the National Team."

The AIFF's Technical Committee, in its meeting last month, recommended that current Senior Men's National Team Assistant Coach Mahesh Gawli be given charge of the India U-20 Men's Team as its head coach, in what would be a dual role for the former Blue Tigers centre-back. Stimac welcomed the suggestion from the Technical Committee, stating that it will help continue the pipeline from junior to senior football.

"It's very important that we maintain this kind of continuity from junior to senior levels, especially when you have such short seasons. Of course, we would like for there to be more games in the season, but Mahesh and I will be keeping an eye on all the players in both the leagues. We've often had to change the players every three to six months, rotate them around, because they keep coming in and out of form," said Stimac. "What we want to do in the long run is to create a number of core players and build a larger squad around them." While India have a little over a year to prepare for the AFC Asian Cup, Stimac is using the upcoming FIFA World Cup Qatar 2022 to build case studies on how different teams are preparing for such a big tournament.

"Over the last few weeks I've been following different national teams that will participate in the World Cup, and how they are preparing for it. It differs from team to team. You do have the best ones, which organise some camps maybe a week ahead, and then you have the Asian teams like Iran or Saudi Arabia, who are a great example. They stopped their national league in November and they gave their coach three-four weeks of camp to prepare for the World Cup. "I will study what kind of results different kinds of preparations produce and come up with a plan for us as well. It's very important that we sit down with FSDL very soon and plan next season's calendar, which needs to give the National Team enough time to prepare. The Asian Cup will be in January 2024, which will probably be mid-season in Indian Football, so we must plan carefully," said Stimac.

FIFA, along with the Education Ministry and the AIFF, last month, launched the Football for Schools programme in India, which aims to take the beautiful game to 25 million children across the land. While Stimac hailed the ambitious project, he also warned against lack of perseverance. "It's a very important project to produce quality footballers in the long run, but we need to continue with the programme over the years. Even if you don't see the results in some time, you need to stick with it, because it's a long-term plan," he said. "China had done something similar recently, involving 50 million kids, but they soon stopped the programme. They invested massive amounts, but it all came to an end. We need to make sure that that does not happen in India."

(The above story first appeared on LatestLY on Nov 11, 2022 05:40 PM IST. For more news and updates on politics, world, sports, entertainment and lifestyle, log on to our website latestly.com).