Amid the ongoing legal and public relations battle between Disney and Scarlett Johansson, Women in Film, Los Angeles, ReFrame and Time's Up, along with her talent agency CAA have come out in support of the Black Widow actor. 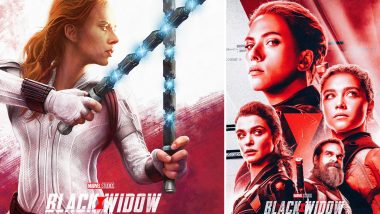 Amid the ongoing legal and public relations battle between Disney and Scarlett Johansson, Women in Film, Los Angeles, ReFrame and Time's Up, along with her talent agency CAA have come out in support of the Black Widow actor. The USD 319.8 billion entertainment media conglomerate had called Johansson's 'Black Widow' breach of contract lawsuit a "callous disregard for the horrific and prolonged global effects of the Covid-19 pandemic." Scarlett Johansson vs Disney Row: Marvel Boss Kevin Feige Is ‘Angry and Embarrassed’ With Black Widow’s Digital Release.

Disney also disclosed her base salary of USD 20M for the Marvel Cinematic Universe film exclaiming that the Disney Plus with Premier Access will compensate her well enough. According to Deadline, responding to this, the advocacy organisations, issued a joint statement calling Disney's characterisation of Scarlett Johansson a "gendered character attack." The statement read, "While we take no position on the business issues in the litigation between Scarlett Johansson and The Walt Disney Company, we stand firmly against Disney's recent statement which attempts to characterize Johansson as insensitive or selfish for defending her contractual business rights." Scarlett Johansson’s Agency Slams Disney For Revealing Her Pay For Black Widow; Calls ‘It An Attempt To Weaponise Her Success’.

Calling out Disney, the statement further continued, "This gendered character attack has no place in a business dispute and contributes to an environment in which women and girls are perceived as less able than men to protect their own interests without facing ad hominem criticism." The two-time Oscar nominee's agency, CAA's co-chairman Bryan Lourd also blasted Disney earlier in a statement for shaming her publicly and "deliberately" moving "the revenue stream and profits" of 'Black Widow' "to the Disney Plus side of the company leaving artistic and financial partners out of their new equation."

He also slammed the media conglomerate for leaking her salary in "an attempt to weaponize her success as an artist and businesswoman." The agent, who is one of the foremost power brokers in the film industry, was incensed that Disney implied the actor was disregarding the impact of a global pandemic on the entertainment business. "They have shamelessly and falsely accused Ms Johansson of being insensitive to the global COVID pandemic, in an attempt to make her appear to be someone they and I know she isn't," Lourd said.

Lourd went on to note that Johansson has appeared in nine Disney and Marvel movies, which he said have earned the company billions of dollars in ticket sales. "Disney's direct attack on her character and all else they implied is beneath the company that many of us in the creative community have worked with successfully for decades," Lourd added. In addition to this, Johansson got support from other celebrities, who pounced on media conglomerate for making an issue of her pay when its own executives are so highly compensated. Alec Baldwin tweeted, "Remarkable to read Disney execs bashing SJ over large salaries..."

Those profiting off 'Black Widow' the most, per the lawsuit, are Disney titans CEO Bob Chapek and executive chairman Bob Iger, who reaped big money tied to the success of Disney Plus. Johansson had filed a lawsuit on Thursday against Marvel owner Disney, claiming that putting the film on Disney Plus caused her to lose out on considerable bonuses. Disney struck back, saying the lawsuit showed her "callous disregard" for the pandemic," and also stated that the star has already been paid USD 20 million for her work on the film.

"There is no merit whatsoever to this filing," Disney said. The company also claimed that the release of 'Black Widow' on Disney Plus with Premier Access "significantly enhanced her ability to earn additional compensation." The actor's contract with Disney called for a worldwide theatrical release, much like other MCU movies. Reports claim that Johansson lost more than USD 50M in Disney's dynamic window experiment, which yielded a first-weekend global PVOD and theatrical weekend for 'Black Widow' of USD 218M, which is a low gross for an MCU title, that typically churns out of late over USD 1 billion. Johansson holds starring credits in seven MCU movies that have amassed USD 10.3 billion at the global box office. Separately she had a voice-over role in Disney's live-action version of 'The Jungle Book' which grossed USD 966.6M worldwide.