She also recently turned in a draft for a remake of Bambi for Disney, and Hello Kitty for New Line and Beau Flynn for which she also serves as an executive producer, as per Deadline. 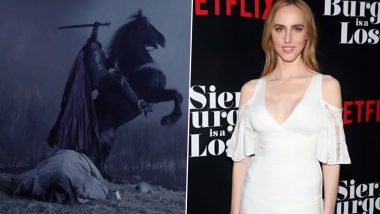 A reboot of Sleepy Hollow has been put in motion by Paramount with Lindsey Beer set to write, direct and produce the classic horror title for the studio.Deadline further reported that Lindsey will be working alongside Todd Garner and Spencer Walken of Broken Road Productions. Currently, the exact plot details are unknown for Beer's adaptation. Christopher Walken Birthday: Here Are 5 Films Of The Actor That You Should Watch.

Over the decades, the tale about the headless horseman who terrorizes a small town and its newest resident, Ichabod Crane, has seen several iterations; including the 1949 Disney animated movie and the 2010s Fox TV series. The most popular one was produced by Paramount in 1999 and starred Johnny Depp as Crane with Tim Burton directing. The film grossed more than USD 200 million at the worldwide box office and remains a must-watch during the Halloween season, according to Deadline.

Beer recently makes her directorial debut with the upcoming Pet Sematary prequel for Paramount, which Lorenzo Di Bonaventura is producing. The film is in post-production and is set to be released this year. Prior to making her jump to directing, Beer has been one of the most sought-after writers in Hollywood, having recently worked on the new Star Trek film for Paramount and Bad Robot. The Acolyte: Amandla Stenberg to Lead Upcoming Disney+ Live-Action Star Wars Series.

She also recently turned in a draft for a remake of Bambi for Disney, and Hello Kitty for New Line and Beau Flynn for which she also serves as an executive producer, as per Deadline.