Get latest articles and stories on Sports at LatestLY. Vietnam and Myanmar played to a 2-2 draw in their final AFC Women's Asian Cup India 2022, Group C tie at the D.Y. Patil Stadium in Navi Mumbai on Thursday. 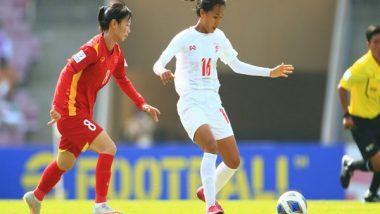 Vietnam came from behind twice to salvage a point and finish third but will have to wait till the Group B matches conclude later on Thursday to know their knockout stage fate, with the two best third-placed teams to join the respective group winners and runners-up in the quarter-finals.

Myanmar, needing a win to finish above their Southeast Asian rivals, started the more aggressive of the two sides and had a first look on goal in the second minute after Tun Win Theingi's threaded pass found Thaw Thaw, whose shot failed to trouble Vietnam custodian Tran Thi Kim Thanh.

Vietnam came close to finding the net a minute later when Nguyen Thi My Anh tried to catch Myanmar goalkeeper Nwe May Zin off her line but her shot from distance was denied by the crossbar.

That set the stage for a well balanced game as both teams created opportunities with Nwe denying Vietnam's Huynh Nhu in the 13th, while Tun's header from inside the box was cleared away two minutes later.

However, it was Vietnam who conceded the first goal when Nguyen Thi Thanh Nha brought down an advancing Noe Khin Myat inside the box, with Tun making no mistake in converting the penalty.

Vietnam fought back and after several missed opportunities, they finally levelled the score at the stroke of half-time, with Nguyen Thi Tuyet Dung beating Nwe off a corner set-piece.

Mai Duc Chung's charges were wasteful in front of goal after the restart with Huynh Nhu and Nguyen Thi Tuyet Dung both missing chances.

Myanmar, however, edged ahead again in spectacular fashion in the 49th minute when Tun set up Tun Khin Marlar, who found space before smashing her effort into the back of the net.

Vietnam were given a lifeline when Myanmar's Saw Thaw Thaw conceded a penalty in the 62nd minute after she brought down Nguyen Anh Thi My inside the six-yard-box.

Huynh Nhu made no mistake from the penalty spot, sending Nwe the wrong way to level the tie for a second time as both teams had to settle for a share of the points. (ANI)