Ashes 2021-22 Live Telecast and Streaming in India: AUS vs ENG Test Series Commentary to be Available in Four Languages

The series which will commence December 8 in Brisbane, will witness yet another iconic clash between arch-rivals England and Australia. Currently, Australia is leading with 33 wins in the series while England has 32 wins so far. 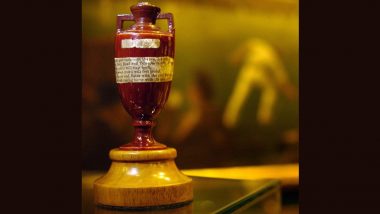 Mumbai (Maharashtra) [India], November 26 (ANI): The oldest and biggest rivalry in the history of cricket, the Ashes will be telecast in four languages for the first time in India. Sony Pictures Sports Network India will broadcast the Ashes 2021 from December 8. The highly anticipated series will be telecast live on Sony Six (English), Sony Ten 3 (Hindi), and Sony Ten 4 (Tamil and Telugu) channels and live-streamed on its on-demand OTT platform SonyLIV. Pat Cummins Named Australia Test Captain, Steve Smith Appointed Vice-Captain After Tim Paine Taking Break From All Cricket

The series which will commence December 8 in Brisbane, will witness yet another iconic clash between arch-rivals England and Australia. Currently, Australia is leading with 33 wins in the series while England has 32 wins so far. 83 Teaser Recreates Kapil Dev's Iconic Catch to Dismiss Viv Richards at Lord's Leaving Cricket Fans Nostalgic (Read Tweets).

The 72nd Ashes tour will determine if England can level the scores down under or will Australia continue to dominate, heating up the rivalry even more. While Joe Root-led English side is brimming with confidence after the return of Ben Stokes and power-packed performances of James Anderson and Ollie Robinson against India this year, Australia's squad consists of iconic players who have been the face of Ashes for years now. Tim Paine Out of Ashes 2021 After Taking Indefinite Break From All Cricket

The Pat Cummins-led Australian side will be backed by the expertise of Vice-captain Steve Smith along with a strong bowling line-up which will surely come in handy for the hosts to maintain their lead in the series and retain the urn.