Haider, who is seen as a bright prospect for Pakistan, said he is more concerned about his own game and wanted to start playing longer innings for the national team and is working on his rotation of strike. 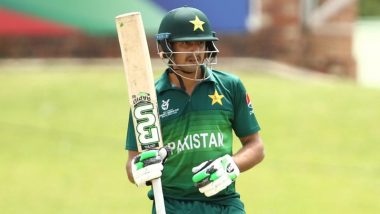 Karachi, December 12: Young Pakistan batsman Haider Ali on Saturday played down the absence of New Zealand's tearaway fast bowler Lockie Ferguson from the upcoming Twenty20 series due to a stress fracture in his back. Ferguson was the player of the series in the recent T20Is against the West Indies, after taking seven wickets at a low average of eight runs. The T20 series between Pakistan and New Zealand will begin from December 18.

"I don't think it is a big difference to us because we are preparing to face all their bowlers and we don't believe in focusing on any one particular bowler," Haider said during a media interaction.

"We give importance to all opposition bowlers be it Ferguson or anyone else. Sometimes it happens that the part-time bowlers take wickets instead of the main bowlers. It's not our mentality to focus on just one bowler," he said. Pakistan Cricket Team All Set for T20I Series Against New Zealand, Here’s A Peek into Squad’s Photoshoot (Watch Video).

Haider, who is seen as a bright prospect for Pakistan, said he is more concerned about his own game and wanted to start playing longer innings for the national team and is working on his rotation of strike.

"I am working on staying at the wicket for a longer period of time and not trying to hit the ball every delivery. I want to play longer innings and pace my innings accordingly." Haider said the quarantine period tested the Pakistani players and officials in Christchurch.

"The quarantine period was not easy for us as we were forced to train in our rooms and couldn't have any nets or training for 14 or more straight days. At times it was disappointing and a bit frustrating." ICC Announces Qualification Process for Women's T20 World Cup 2023.

"We are trying to best utilise the days available to us to prepare for the three T20 matches." Pakistan are scheduled to play three T20Is on December 18, 20 and 22, and the ICC World Test Championship matches will be held at Mount Maunganui and Christchurch from 26 December and January 3 respectively. Pakistan under Sarfaraz Ahmed won the T20 series in New Zealand in early 2018 by 2-1.