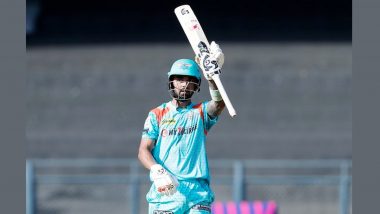 Apart from Mohsin Khan, Dushmantha Chameera, Ravi Bishnoi, and Krishnappa Gowtham scalped one wicket each, which put the joint effort of Rishabh Pant, Axar Patel, and Mitchell Marsh in vain.

Chasing 196, Delhi had the worst start possible as they lost their opening batter, Prithvi Shaw, in the 2nd over with only five runs on the board. Mohsin Khan then provided Lucknow with another breakthrough when he dismissed David Warner in the 3rd over, leaving Delhi's total at 13/2.

Skipper Rishabh Pant and Mitchell Marsh joined hands at the crease and anchored the innings. The duo provided Delhi with the lost momentum as they smashed 66 runs in just 6 overs. But their happiness came to halt after K Gowtham sent Marsh back to the dugout, after scoring 37 runs off 20 balls.

Lalit Yadav came to the crease but could not stand there for long as he got bowled by Ravi Bishnoi in the 9th over, with the team's total at 86/4. Skipper Pant was then joined by Rovman Powell and the duo changed the phase of the game, as they took Delhi across the 120-run mark in just 13 overs. Lucknow Super Giants Defeat Delhi Capitals To Continue Winning Run in IPL 2022.

Their partnership came to an end after Pant got bowled by Mohsin Khan in the 13th over, with Delhi's total at 120/5. Powell was joined by Axar Patel and the duo kept the hopes alive for their side. They scored quick runs and brought Delhi back into the game.

It was Mohsin Khan who struck again and scalped the dangerous-looking Powell and Shardul Thakur in the 17th over, leaving the team's total at 148/7. Axar Patel kept the momentum alive for Delhi as he along with Kuldeep Yadav kept the hitting runs from both the ends.

With 36 runs left to win off 12 balls, the duo smashed 15 runs in the 19th over. Needing 21 runs off 6 balls, Kuldeep Yadav welcomed Marcus Stoinis in the final over with a six, which was followed by a wide ball.

A single then brought Axar back to the strike but unfortunately, he could not bring Delhi to the winning side as Stoinis then bowled three dot balls and got hit for a six in the last delivery, which ended the match in Lucknow's favour by 6 runs.

Earlier, KL Rahul's knock of 71 runs off 51 balls and Deepak Hooda's 34-ball 52 guided Lucknow to the total of 195/3 in the first innings against Delhi. For Delhi, Shardul Thakur scalped three wickets.