Get latest articles and stories on Sports at LatestLY. Both newcomers Conor Olphert and Stephen Doheny have retained their spots. While Olphert made his international debut against India, uncapped Doheny could well be in line to get an opportunity in the upcoming assignment. 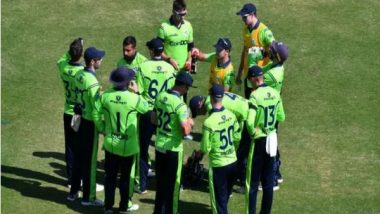 Ireland have stuck to the same squad that was named for their recently concluded T20I assignment against the No.1-ranked Men's T20I team on the ICC Rankings, India.

Although Ireland lost the two-match series 0-2, they had almost chased down a massive target of 226, falling just four runs short in the final T20I.

Both newcomers Conor Olphert and Stephen Doheny have retained their spots. While Olphert made his international debut against India, uncapped Doheny could well be in line to get an opportunity in the upcoming assignment.

Also Read | What is BazBall? Know All About England's New Approach to Test Cricket Under Coach Brendon McCullum.

"Naturally, the Selectors are backing the players that performed well against India - the high standards we sought were delivered upon, and we hope the squad can put in similar performances against New Zealand," said Andrew White, Ireland's Chair of National Men's Selectors in a statement released by Cricket Ireland.

"The second T20I against India was a superb spectacle for the fans, but I know the coaching staff and players were gutted not to get across the line," White said.

"The players should take great confidence from the past week, and we hope that this can lead to greater consistency in performances. It would be fantastic to see the sporting public - young and not-so-young - come out in their numbers and support the team at Stormont," he added.

The three-match T20I series will be preceded by three ODIs, for which Ireland have already announced their squad.