Get latest articles and stories on Sports at LatestLY. Gokulam Kerala trounced Kickstart FC 5-0 in their Indian Women's League 2022 fixture at the Capital Ground in Bhubaneswar on Saturday. 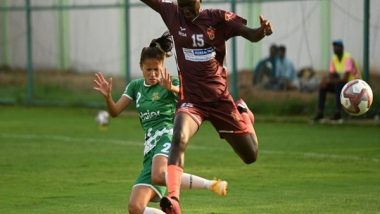 The Malabarians picked up from where they left in the previous game and scored an early goal. Manisha Kalyan's cross from the left flank was directed towards the goal by Elshaddai Acheampong in the 7th minute. Within five minutes, Loitongbam Ashalata Devi doubled the lead for Gokulam Kerala. She beat the goalkeeper from the penalty spot after Dangmei Grace was fouled inside the box.

The defending champions enjoyed a sixty-eight per cent ball possession in the first half. Nevertheless, Kickstart FC had an equal number of shots on target as their counterparts.

At the hour mark, Nongmaithem Ratanbala Devi scored an Olympic goal to make it 3-0 for Gokulam Kerala. The No. 10's corner kick was too hot to handle for Kickstart FC goalkeeper Maibam Linthoingambi Devi as she spilled it into her own net.

However, it was Manisha Kalyan who stole the show with a moment of brilliance in the 80th minute. The prolific forward made a perfect Cruyff turn at the edge of the box and sent in a left-footed curler into the top left corner to make it 4-0.

To put a cherry on top for Gokulam Kerala, Kalyan set Karishma Shirvoikar up in the added time and the youngster tapped the ball in to complete a magnificent victory. (ANI)