Get latest articles and stories on Sports at LatestLY. Hong Kong missed out on the 2021 edition after defeat in the 2019 Qualifiers, having previously appeared at the top table in 2014 and 2016. 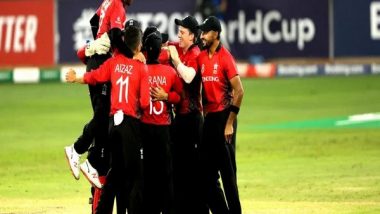 Sydney [Australia], July 5 (ANI): It has been six years since Hong Kong last graced the ICC Men's T20 World Cup but captain Nizakat Khan is confident his country can make their return in 2022.

But now Khan believes his side are better placed than ever to make it through and play against the very best in Australia later this year.

"Our team is looking very good. We have more experience now in our team compared to our last World Cup qualifiers. We are much more balanced this time, and we have a good combination of our spinners and fast bowlers," said Nizakat Khan in a statement.

Qualification represents a chance for Khan and his teammates to represent his country on the world stage and pit themselves against the world's best cricketers. But Khan is also focused on what it could mean for the wider game back home.

"It would mean a lot, especially for our youngsters back in Hong Kong. They always see us playing cricket, and especially if we play against the top teams, it's something to boost them up. We're all really looking forward to this," said Nizakat Khan.

"Cricket Hong Kong have been doing really good work for the junior pathway. The 13s, 15s, 17s, 19s and we have the domestic club game and the players are coming up from the system. We have a very good set-up in Hong Kong," he added.

To make their dream a reality, however, Khan knows his side must navigate the ICC Men's T20 World Cup Global Qualifier B in Zimbabwe. Games against the Netherlands, Papua New Guinea and Uganda await before a potential semi-final and final, with two qualification spots up for grabs in total.

Yet skipper Khan has the belief that his side can make it all the way if they keep their minds on their cricket and lean on their experience.