Sports News | Milkha Singh -- Not Just a Legend on the Field, but Also a Trendsetter off It

Ace sprinter Milkha Singh was not just a legend on the field, but also a trendsetter off it. While his achievements on the sports field is well documented, the biopic on his life 'Bhaag Milkha Bhaag' inspired the whole nation and started the trend of 'Sports Biopics' in Bollywood. 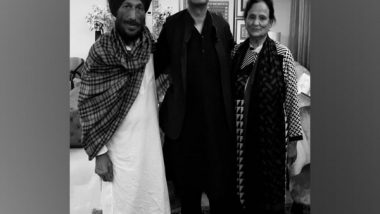 New Delhi [India], June 19 (ANI): Ace sprinter Milkha Singh was not just a legend on the field, but also a trendsetter off it. While his achievements on the sports field is well documented, the biopic on his life 'Bhaag Milkha Bhaag' inspired the whole nation and started the trend of 'Sports Biopics' in Bollywood.

The track legend's willpower saw him overcome every hurdle and his journey from Govindpura to Delhi in 1947 and then to dominate the world stage in athletics was stuff dreams are made of. And it came as no surprise that the movie starring Farhan Akhtar was a blockbuster hit.

There had been a couple of movies based on sportspersons before 'Bhaag Milkha Bhaag', but none created the magic like this one. With Prasoon Joshi writing the script and Rakeysh Omprakash Mehra directing it, the movie had success written all over it.

Indian screenwriter and chairperson of the Central Board of Film Certification (CBFC) Prasoon Joshi said the track legend was an inspiration for everyone.

"It was an honour to write Bhaag Mikha Bhaag which allowed me to explore Milkhaji's life and learn a lot from it. Had just met him and his wife Nirmal Ji a few months back in Delhi and at 92 he was still looking forward to life. A doer an optimist whose positivity will always resonate with me," said Prasoon.

Sharing how Milkha inspired him personally, Joshi said, "Milkha Ji was an inspiration for not only the film I wrote but In life; Unhone race lagayi. Woh mushkilon se bhaage nahi , daud lagai unke saath." (He raced. He did not run away from difficulties, ran with them.)

While the film's success is well documented, it also opened the doors for the genre of Sports Biopics. Since then there has been no looking back as directors and writers have come forward to recapture the lives of sports legends in order to tell their "untold" stories through movies.

In 2016, fans got another treat when 'MS Dhoni: The Untold Story' a movie based on the life of legendary Indian cricketer Mahendra Singh Dhoni went on floors. The movie - starring late Sushant Singh Rajput -- shattered several records since its release and inspired the youngsters from the smaller towns of India to believe in dreams.

Sports Biopics have since become a favourite with fans who love seeing the 'off the field' stories of their favourite athletes on the silver screen.

Coming back to Milkha Singh's biopic, what made the movie more special is that the legendary athlete and his daughter, Sonia Sanwalka, co-wrote his autobiography, titled 'The Race of My Life'-- the book that inspired 'Bhaag Milkha Bhaag.' Milkha had sold the film's rights for one rupee and inserted a clause stating that a share of the profits would be given to the Milkha Singh Charitable Trust which was founded in 2003 with the aim of assisting poor and needy sportspeople.

While Milkha passed away due to COVID-related complications in a private hospital in Chandigarh late on Friday night, his legacy will live on forever. (ANI)