Taylor limped out of the session ahead of their departure for England with a calf injury. 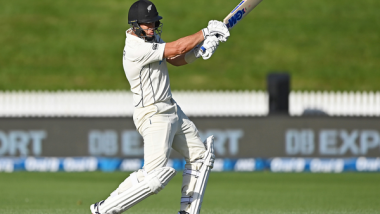 Auckland [New Zealand], May 3: New Zealand has been given an injury scare ahead of the upcoming two-match Test series against England as Ross Taylor limped out of the team's first training session. Taylor limped out of the session ahead of their departure for England with a calf injury. New Zealand coach Gary Stead has said that the reports will come later on Monday and then he will do the needful. "The reports I've had so far is it's more precautionary than anything but we'll see how he scrubs up," ESPNcricinfo quoted Stead as saying. New Zealand Dethrone England to Become Top-Ranked ODI Team, India Hold Third Position.

"You are always worried when any injuries happen but someone of Ross's standing and calibre as a Test player you always have a little bit of a concern. Fingers crossed everything is good and we still have time on our side, but we'll just have to wait and see what the medical team says," he added. Taylor had a hamstring niggle earlier this year and this saw him miss two ODIs against Bangladesh.

The BlackCaps are slated to leave for England in the middle of May and they will face the Three Lions in two-match Test series, beginning June 2 and this will be followed by the World Test Championship (WTC) final against India, beginning June 18 in Southampton.

Monday was the start of two training camps that the BlackCaps will have prior to departure."We've got two open wickets, the ground staff has done an amazing job in getting the facilities up pretty close to what I think English conditions would be like then we have the marquee as well," Stead said.

"We are still a month away from playing England so there's still four weeks of good, solid preparation so today is the start of that for us," said Stead.