On This Day in 2009: Deccan Chargers Won Second Edition of IPL

The second edition of the IPL was played in South Africa due to the general elections in India and Deccan Chargers defeated Royal Challengers Bangalore (RCB) to win the tournament. 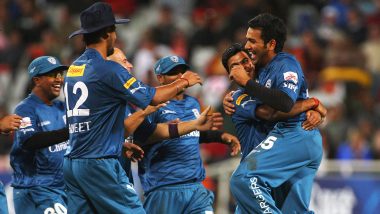 New Delhi, May 24: It was on May 24, 2009, when Deccan Chargers managed to win the second edition of the Indian Premier League (IPL).

The second edition of the IPL was played in South Africa due to the general elections in India and Deccan Chargers defeated Royal Challengers Bangalore (RCB) to win the tournament.

In the finals against RCB in Johannesburg, Deccan Chargers managed to register a score of 143/6 in the allotted twenty overs. Herschelle Gibbs top scored for the Chargers as he played an unbeaten knock of 53 runs from 48 balls.

For RCB, Anil Kumble scalped four wickets. Coming into the match, Chargers skipper Adam Gilchrist had been in remarkable form, but Kumble managed to dismiss him in the first over of the innings to peg Chargers back.

However, Chargers somehow managed to scrap to more than 140 runs in the allotted twenty overs.

Defending 143, Chargers managed to take wickets at regular intervals and no RCB batsmen were able to stay at the crease for a long time.

In the end, all hopes of RCB's win were dependent on Robin Uthappa, but he was not able to strike big shots in the final over and as a result, the side was restricted to 137/9, giving Chargers a win by six runs.

This win is considered remarkable as the Chargers had finished last in the first edition of the IPL, and the side then managed to drastically change their fortunes in the second edition.

Till now, Mumbai Indians has managed to win the IPL four times, while Chennai Super Kings has won it thrice.