Former India shuttler Trupti Murgunde on Wednesday said that PV Sindhu has received a decent draw at the upcoming Tokyo Olympics and she is definitely a medal contender at the games. 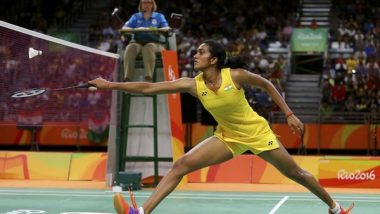 New Delhi [India], July 21 (ANI): Former India shuttler Trupti Murgunde on Wednesday said that PV Sindhu has received a decent draw at the upcoming Tokyo Olympics and she is definitely a medal contender at the games.

"PV Sindhu definitely has a very decent draw. I don't think it's too easy, also at the same time, it is not too tough either. It's good that she will be pitted against players who she has faced in the past. That really gives you a much clearer idea of what she's up against," said Dhyan Chand awardee Murgunde during a virtual interaction.

"She has a good chance, the opponent from Hong Kong, Cheung Ngan Yi might prove a little bit of issue to Sindhu. Once Sindhu gets past that hurdle, she has Mia Blichfeldt in her path, who she beat at the Swiss Open in March, and then she could face Akane Yamaguchi, who she has beaten in the recent All-England Championships," she added.

When asked about the transformation of Sindhu, Trupti said: "It is going to be different for Sindhu, she's no longer the player she was in 2016. In 2016, we never expected she would win a medal. Now of course, after her performance then, everyone will be expecting a lot more from her this time around."

"Sindhu is a very skillful player, as well as Sai Praneeth. When you try to use your skills more, and that's a large part of your strength, you don't want any drift, because it really gets difficult with your strokes and impacts your accuracy. They have both already begun practicing in the main hall, so I think they will have more than enough time to get used to the conditions," she added.

When asked about the hopes from Sai Praneeth at the upcoming Games, Trupti said: "I have always thought B Sai Praneeth is a really good player, and that he can beat anyone on his day, if he gets in the groove. Speaking of his draw, he's played Misha Zilberman a few times, so he's expected to win that match. Mark Caljouw is someone he's not played, so it might be a difficult match."

Talking about the entire Indian Olympic contingent, Trupti said: "I really want this Olympics to be the best possible for Indian sport. I think the preparations have been fantastic. The players, along with their coaches have received great support from the government and other systems in place. There's better planning and infrastructure in place now."

"The only hiccup has been the pandemic, and the fact that not much sporting action has happened over the course of the last year. Of course, there are players that are expected to do well like Mirabai Chanu and the archery team who are playing on the first day. If they do well, that will give a lot of confidence to players," she added.