Australia all-rounder Ashton Turner is hopeful that his return to bowling will bolster his chances of making it to the T20 World Cup squad. 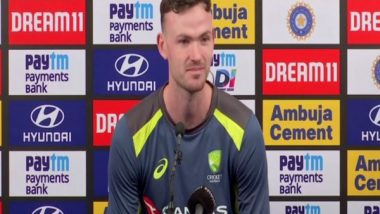 Dhaka [Bangladesh], August 1 (ANI): Australia all-rounder Ashton Turner is hopeful that his return to bowling will bolster his chances of making it to the T20 World Cup squad.

Turner has undergone multiple shoulder operations during his career and as a result, he has not been able to bowl much. In the last two ODIs against Australia, Turner went on to take two wickets.

"Bowling is something I've always loved and unfortunately due to my shoulder injuries I haven't been able to contribute much in games. It's been almost two years since my last operation, so I feel as good about my bowling as I have in a long time. Although I haven't been able to bowl a lot in games, behind the scenes I've been working a lot at training and it's nice in conditions that suited spin bowling and to be another option for the captain. Hoping that my bowling workloads can increase from here," ESPNcricinfo quoted Turner as saying.

"Don't think I've bowled eight overs in a game for more than four years...no doubt that will take some time. Feel like I've done everything I can over the recent periods and I'm starting to enjoy it as much as I used to," he added.

Australia will next lock horns against Bangladesh in a five-match T20I series, beginning Tuesday. The series will be played across one week and Australia will be led by Matthew Wade in the absence of Aaron Finch.

"There's no secret until you've been able to walk out in high-pressure situations and perform, training can't replicate that pressure. I'm fortunate that for a number of years now I've been able to experience some close games in the middle order and try to finish innings. With that experience, comes confidence and that's not something that can be found at training," said Turner. (ANI)