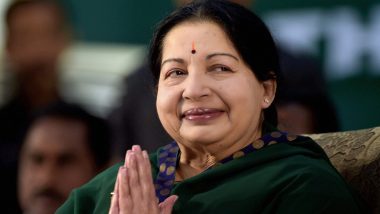 Chennai, August 2: Contending absence of legal powers for the government to acquire ancestral properties -- immovable and movable -- for memorial purposes as well as other aspects like procedural infirmities, J. Deepa, the niece of late Tamil Nadu Chief Minister and AIADMK General Secretary J. Jayalalithaa has moved the Madras High Court.

She has petitioned the court against the Tamil Nadu government's move to acquire Veda Nilayam -- the Poes Garden residence of Jayalalithaa. The High Court had recently held that Deepa and her brother J. Deepak are the legal heirs of Jayalalithaa in respect of the latter's ancestral and self-acquired properties. Deepa said the Poes Garden residence was purchased by her grandmother N.R. Sandhya alias Vedha Jayaraman in the year 1967. The residence was named as "Veda Nilayam" after her grandmother. Tamil Nadu Govt to Rename 3 Chennai Metro Stations After Late Former CMs

Deepa has also contended the acquisition of Veda Nilayam will hamper the proceedings of Justice Arumugaswamy Commission enquiring into the suspicious death of Jayalalithaa. "The acquisition proceeding has to be stopped immediately otherwise the evidence required by Hon'ble Justice Arumugaswamy Commission may be destroyed. The State Government cannot take two stands. On one side a Commission was appointed and on the other side, acquisition proceedings are taking place if the later persist the former will fail. The attitude of the State Government will definitely affect the course of any such enquiry," Deepa said in her plea.

She also said the Tamil Nadu government instead of completing the construction of the memorial at Marina, is trying to acquire her ancestral property and convert it as a memorial. There is no urgency to make an ordinance to convert Veda Nilayam as memorial during the pandemic Covid-19 period. Pandemic has hampered our legal options and all work related to property matters and court matters, Deepa said.

"It is a sheer shame on the part of the state government by taking the personal belongings of a woman including her clothes and ornaments. It is unfair and indecent and harms the dignity of a woman. I cannot allow any forms of insult by such acts on my aunt as she is like a mother to me," Deepa said in her petition. Deepa said her family has a history in Veda Nilayam and have several treasures from our forefathers - metal treasures like gold, silver, copper, platinum, diamonds and various precious metals.

"The antiques are of high value and heritage and were passed on to my aunt by our great grandfather who was a physician in the Royal Palace of Mysore," she said. She Pointing out the Right to Fair Compensation and Transparency in Land Acquisition, Rehabilitation and Resettlement Act, 2013 (RFCTLARR Act) does not provide for the takeover of the personal belongings but the Tamil Nadu government has made the above statement and thereby claiming the listed-out movables belonged to them.

Deepa contended that she and her brother are the legal heirs of Jayalalithaa and are entitled to the latter's belongings. "The state government of Tamil Nadu has not obtained any concurrence from us while making such statement," Deepa said. "The ideology of extracting the movables from our family property is nothing but to make money out of precious treasures which are left by our ancestors," Deepa contended.

Deepa in her petition said the acquisition proceedings of the state government is made purely for political benefits in the upcoming elections. "The government of Tamil Nadu should not exhibit the gold, silver and diamond ornaments that were used by my aunt, also there will be a threat to robbery," she said in the petition. Deepa also sought a court direction to the authorities to permit her, her husband Madhavan, legal representatives, architect, jewel appraisers, engineers and other technicians to make an inventory of the estate of Jayalalithaa and submit it to the court.

Meanwhile, the Ordinance issued by the state government does not list out specifically any diamond/platinum jewellery that was found in Jayalalithaa's residence. According to the Ordinance, a total of 32,721 moveable properties were found in Jayalalithaa's residence that includes 14 gold items weighing a total of 4.372 kg, 867 silver items weighing 601.424 kg, 11 televisions, 10 refrigerators, 38 air conditioners, 29 telephones/mobile phones, 653 documents like court papers, licences, and IT statements, furniture, mementoes, kitchen utensils, dress materials, pooja items and others.

A devoted reader, Jayalalithaa also had 8,376 books as part of her movable properties. As part of the plan to convert Veda Nilayam into a memorial, the Tamil Nadu government recently announced that it had deposited Rs 67.9 crore as the purchase price with the city civil court. The Chennai district administration made public the acquisition and declared that the property was encumbrance-free and vested with the state government. The Rs 67.9 crore included the Rs 36.8 crore income and wealth tax dues and the compensation to the two legal heirs of Jayalalithaa -- Deepak and Deepa.

(The above story first appeared on LatestLY on Aug 02, 2020 02:37 PM IST. For more news and updates on politics, world, sports, entertainment and lifestyle, log on to our website latestly.com).