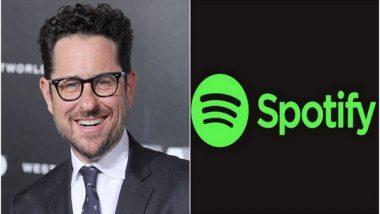 According to Variety, Bad Robot Audio will be led by Christina Choi, formerly with Audible and Spotify, who has joined as head of podcasts at Bad Robot.

"Podcasts have obviously become a go-to destination for entertainment, education and discovery," Abrams, Bad Robot co-CEO, said in a statement.

Abrams added, "Given Bad Robot's work in TV, film, games and music, podcasts was an obvious topic of conversation within the company for a long time. We are thrilled to welcome Christina Choi to lead the way, and to collaborate with Dawn [Ostroff] and the incredible Spotify team to bring some incredible stories to life."

Over the last three years, Spotify has punched its way into the podcast arena with acquisitions of Gimlet, Anchor, Parcast and The Ringer and multiple exclusive deals for podcast shows including 'The Joe Rogan Experience'.

Ostroff continued, "Bad Robot productions have produced some of the world's most riveting and award-winning content and we cannot wait to see how their imaginative stories transcend into the audio space."

Bad Robot's business spans film, TV, gaming, music and now podcasting. In the film, the company has a slate of projects in development under its WarnerMedia deal, including priority projects with Warner Bros., DC, HBO Max and Warner Animation Group including a live-action remake of the anime film 'Your Name' and Dr Seuss's iconic children's book, 'Oh, The Places You'll Go!' set up at Warner Bros. and to be directed by Jon M. Chu.

In addition, Bad Robot has the thriller 'Lou', starring Allison Janney, Jurnee Smollett and Logan Marshall-Green, set up at Netflix, as well as multiple projects at Paramount Pictures.

As per Variety, recent TV projects for Bad Robot include 'Lovecraft Country' for HBO, 'Lisey's Story' for Apple TV Plus, and 'UFO', a four-part docu-series for Showtime. The company is currently in production on Season 4 of 'Westworld' for HBO. (ANI)