Tech News | Microsoft to Unveil Next Generation of Windows in June

Get latest articles and stories on Tech at LatestLY. Tech giant Microsoft will unveil the next generation of Windows on June 24. The announcement comes a week after the company's CEO Satya Nadella teased major upgrades to the PC operating system for developers and creators. 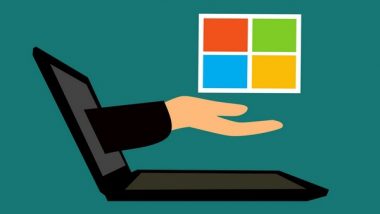 Washington [US], June 3 (ANI): Tech giant Microsoft will unveil the next generation of Windows on June 24. The announcement comes a week after the company's CEO Satya Nadella teased major upgrades to the PC operating system for developers and creators.

The invite comes just a week after Nadella teased a "next generation of Windows" announcement. Microsoft is expected to detail its next significant changes to Windows, and they will likely include a number of visual enhancements.

We are also expecting to see some significant UI changes to Windows under something codenamed 'Sun Valley'. Microsoft's event invite even appears to tease a new Windows logo.

The tech giant confirmed last month that Windows 10X, its OS originally built for dual-screen devices, will no longer ship. The company is now rolling the visual elements of Windows 10X into the main version of Windows 10 instead.

A lot of the visual work has already started, with new system icons, File Explorer improvements, and the end of Windows 95-era icons. Microsoft is also focusing on improving the basic foundations of Windows, with fixes for a rearranging apps issue on multiple monitors, the addition of the Xbox Auto HDR feature, and improvements to Bluetooth audio support.

Nadella has also promised to unlock a better economy for developers and creators within Windows itself.

Microsoft has also been working on a new app store for Windows in recent months, and rumours have suggested Microsoft will open its store up to all apps and rival payment platforms. (ANI)