Did The Simpsons Predict Elon Musk's Twitter Takeover in 2015? Find Out Here

In a recent tweet, Elon Musk revealed how the Simpsons predicted his Twitter takeover back in 2015. Elon Musk shared a photo of the animated sitcom episode from 2015 that seemed to allude to his purchase of Twitter. 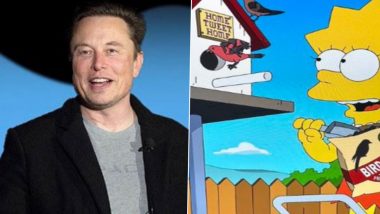 Washington, November 27: Once again, The Simpsons have achieved the impossible! In a recent tweet, Elon Musk revealed how the Simpsons predicted his Twitter takeover back in 2015.

Elon Musk shared a photo of the animated sitcom episode from 2015 that seemed to allude to his purchase of Twitter. "Simpson's predicts I buy Twitter S26E12," tweeted Musk. Elon Musk Says Will Make ‘Alternative’ Smartphones if Apple, Google Remove Twitter From App Stores.

According to New York Post, the opening scene of the episode, "The Musk Who Fell to Earth," features Lisa Simpson taking care of a birdhouse with the sign, "Home Tweet Home." When a bald eagle catches and kills some baby birds, she is feeding them. Musk enters the scene in his rocket ship as the eagle soars out into the distance. The eagle, a cherished American symbol, is destroyed by the aircraft's fire.

"Brace yourselves, family. We are about to meet a being with intelligence far beyond ours," Homer Simpson says before directing Bart to grab his baseball bat. Musk takes off his space helmet and identifies himself: "Hello, I'm Elon Musk." The bat is thrown at his head by Homer. Lisa yells, "Dad, no! Elon Musk is possibly the greatest living inventor."

The camera moves to a modern birdhouse with cutting-edge technology that has drawn several birds. "I guess humanity wants its change one birdhouse at a time," Lisa says as Musk re-boards his ship. Not just this, just a few days ago, as Donald Trump announced that he will seek the Republic Party nomination to contest the 2024 presidential election, the producer of the hit show 'The Simpsons' took to Twitter to show something remarkably funny yet astonishing! Elon Musk Still Firing Employees at Twitter, Coders Brought Back After Mass Layoffs Being Shown Door Again Amid Thanksgiving Festivities.

'The Simpsons' producer Al Jean took to Twitter to share a clip from a 2015 episode of the show featuring Homer Simpson and a presidential campaign sign reading "Trump 2024."