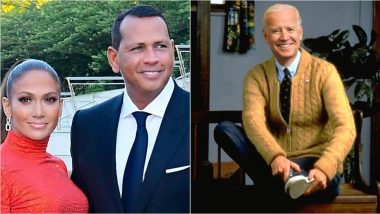 Celebrity couple Jennifer Lopez and Alex Rodriguez officially endorsed Democratic presidential candidate Joe Biden for the 2020 Presidential elections. According to Fox News, Lopez and Rodriguez on Friday (local time) had a virtual chat session with the former Vice President and his wife Dr Jill Biden where they were seen voicing their support for him. The couple also went on to discuss their concerns about the ongoing coronavirus pandemic, economy, racism, and the importance of voting for the Latino community. Kanye West Claims He Is Ahead of Donald Trump, Joe Biden in Kentucky Using Fake Polling Data of US Presidential Elections 2020

"We're thrilled and we're excited to vote. I think our voice has never been more important. We want to come together as a team to defeat Covid and to rebuild this U.S. economy that needs us all so much," Variety quoted Rodriguez as saying in the video posted to Biden's social media on Friday. "For me, it's unifying the nation again. Getting rid of this hate, thinking about my kids walking around in a world where, you know it's OK to be racist or prejudiced because our administration says it's OK," Lopez said. Saturday Night Live Returns to Studio with Jim Carey, Alec Baldwin’s Parody of This Week’s Presidential Debate (Watch Video)

"That to me is really sad because it's not the country I grew up in," she added.

The couple ended the conversation by giving out the messages to the Latino community in Spanish urging them to vote in the upcoming election.