Sashi Panja and Sovandeb Chattopadhyay were given the charge of Industry and Commerce and Parliamentary Affairs departments respectively, portfolios which were earlier with Chatterjee who was suspended by the party after his arrest. 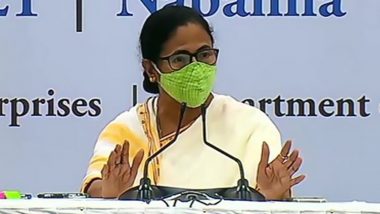 Banerjee changed the portfolios of nearly half the members of the ministerial council in one of the biggest reshuffles of the cabinet since her party, the Trinamool Congress, came to power for the first time in the state in 2011.

The first ministerial rejig since the TMC stormed back to power for the third consecutive term in May last year, came when the party is facing a crisis over the arrest of senior minister Partha Chatterjee by the ED over the school jobs scam last month.

Supriyo was allocated Information Technology and Electronics, one of the departments held by Chatterjee. The singer-turned-politician also got the Tourism portfolio. Sashi Panja and Sovandeb Chattopadhyay were given the charge of Industry and Commerce and Parliamentary Affairs departments respectively, portfolios which were earlier with Chatterjee who was suspended by the party after his arrest.

Satyajit Barman was made the new Minister of State in the Education department, replacing Paresh Adhikary. The latter whose name also cropped up in the scam was shunted out. Banerjee had on Monday carried out a major overhaul in her party. Babul Supriyo, 8 Others Take Oath as Ministers in Mamata Banerjee Govt.

She had said that four-five new faces would be inducted into the new cabinet, while a similar number of present cabinet members would be utilised for party work. Finally, the numbers inducted were far higher than earlier expected.

According to TMC insiders, by inducting eight new faces and dropping four from the ministry, the TMC supremo effected the biggest reshuffle since 2011.

Besides Supriyo, four others - Udayan Guha, Partha Bhowmick, Snehasis Chakraborty and Pradip Mazumdar - were sworn in as cabinet ministers by Governor La Ganesan.

Apart from Adhikary, Humayun Kabir, Ratna De Nag and Saumen Mahapatra were also dropped from the ministry. The reshuffle also witnessed an easing of pressure from ministers burdened with several departments and the young brigade taking the lead in the new ministry.

Kolkata Mayor Firhad Hakim, who had been heading three ministries, has now been allotted only Urban Development and Municipal Affairs, whereas as his two other departments – Housing and Transport - went to Power Minister Aroop Biswas and to newly inducted Snehasis Chakraborty respectively.

Panja, who has been handed the key portfolio of Industry and Industrial Reconstruction, will continue to hold her present department - Women and Child Development. Indranil Sen, a junior minister in the Information and Cultural department, was given the additional charge of Technical Education as MOS Independent Charge replacing Kabir.

Newly appointed Minister Partha Bhowmick was given the charge of Irrigation and Waterways, replacing Mahapatra, a three-time minister. Udayan Guha, one of the tallest leaders of the party in the northern part of the state, was given charge of the crucial North Bengal Development department.

With just a year left for crucial panchayat polls, Pradeep Mazumdar, an agricultural expert, was given the charge of the Panchayat and Rural development department. Birbhaha Hansda, presently a minister of state, was elevated to MOS- Independent charge of Self Help Group and Self Employment. She will, however, continue to function as a junior minister in the Forest department.

Senior Minister Manas Bhunia, who is presently in charge of the water resources department, was given the additional charge of the environment.

The imprint of TMC national general secretary Abhishek Banerjee was evident in the reshuffle as most of those who took oath are considered close to him. In All, Mamata Banerjee's Cabinet Expanded to Include Nine New Faces.

Supriyo, a former BJP MP who quit the saffron party and joined the TMC after being dropped from the Union cabinet last year, is presently a TMC MLA from the Ballygunge assembly constituency in Kolkata. Abhishek Banerjee, who is considered number two in the party, has been instrumental in the induction of Supriyo into TMC.

Bhowmick and Chakraborty, considered close to the TMC national general secretary, have been relieved of their organisational responsibilities in North 24 Parganas and Hooghly districts, respectively. Reacting to the reshuffle of the Mamata Banerjee cabinet, the BJP claimed that the entire country knows the TMC is running “one of the most corrupt governments”. “So, no amount of reshuffling or overhaul will be able the party to get rid of its sins," Leader of the Opposition Suvendu Adhikari said.