The Buffalo mayor's office told CNN that the 57 members that resigned from the unit make up the entire active emergency response team. A few members of the unit are out currently and are not included in the 57 that resigned, according to the mayor's office. 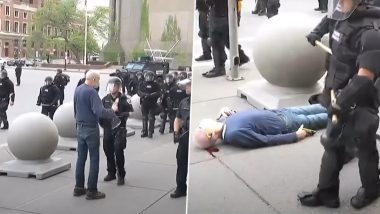 New York, June 6: Fifty-seven police officers in Buffalo, New York, have resigned from the force's emergency response team following the suspension of two officers who allegedly pushed a 75-year-old protester to the ground, a source close to the situation informed CNN on Friday (local time).

An investigation is underway in a protest incident Governor Andrew Cuomo called "wholly unjustified and utterly disgraceful." The man was seriously injured.

Video of the demonstration on Thursday showed a row of officers walking toward the man and two pushing him. His head bleeds onto the sidewalk as officers walk past him, some looking down at him. George Floyd Protests: Buffalo Police Suspends Two Cops Seen in Video Pushing 75-Year-Old Protester to The Ground.

The demonstrators in Niagara Square were, like those across the country, calling for racial justice after the killing of George Floyd in Minneapolis police custody.

"Fifty-seven resigned in disgust because of the treatment of two of their members, who were simply executing orders," Buffalo Police Benevolent Association president John Evans told WGRZ on Friday. The man identified as Martin Gugino, as confirmed by Cuomo's office, is currently hospitalized and is reported to be in serious but stable condition, as per authorities.

Attorney Kelly V. Zarone representing Gugino released a statement saying he is "alert and oriented" and described him as a longtime peaceful protester and human rights advocate. "Mr. Gugino requests privacy for himself and his family as he recovers," Zarone said.

"He appreciates all of the well wishes he has received and requests that any further protests continue to be peaceful," Zarone added. Megan Toufexis, Gugino's daughter, told CNN that her father attended the protest Thursday to discuss First Amendment rights with police. Protests in the city continued into the evening Friday.