The country's government is pondering over Turkey's proposal to guard Kabul's Hamid Karzai International Airport after NATO forces withdraw while underlining that Afghan security forces are capable of protecting the airports. 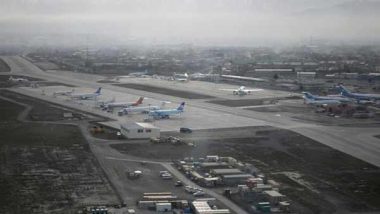 Washington [US], June 18 (ANI): The country's government is pondering over Turkey's proposal to guard Kabul's Hamid Karzai International Airport after NATO forces withdraw while underlining that Afghan security forces are capable of protecting the airports.

"All airports with international standards, including Hamid Karzai International Airport, will remain operational and we will decide about them," said Rahmatullah Andar, a spokesman for the Office of the National Security Council (NSC).

Afghanistan will decide about the issue in light of its national interests, Tolo News reported citing the NSC.

"The security forces will provide security to the airports based on a regular plan," said Mohammad Amiri, deputy spokesman to President Ashraf Ghani.

Turkey, whose forces in Afghanistan have always been of noncombatant troops, is reported to have offered to guard Hamid Karzai International Airport.

Taliban has opposed the Turkish proposal to guard the Kabul airport and said that Ankara must leave Afghanistan as per the 2020 deal.

Suhail Shaheen, a spokesperson to the Taliban expressed his opposition to Turkey's proposal to safeguard the Hamid Karzai International Airport in Kabul after the US and North Atlantic Treaty Organisation (NATO) troops' withdrawal, reported The Khaama Press Agency.

US National Security Advisor Jake Sullivan told reporters on Thursday that during their first bilateral meeting on Monday, US President Joe Biden and Turkish President Recep Tayyip Erdogan "agreed that they would work together" to ensure the Turkish mission is established ahead of the US president's September 11 deadline to withdraw all US forces from Afghanistan.

"President Erdogan indicated he would need, as you said, certain forms of support to do that, and President Biden committed that support would be forthcoming," Sullivan said on a conference call.

"President Erdogan expressed satisfaction with that, and the two of them tasked their teams just to work out the final details, but the clear commitment from the leaders was established that Turkey would play a lead role in securing Hamid Karzai International Airport, and we are now working through how to execute just that," added Sullivan. (ANI)