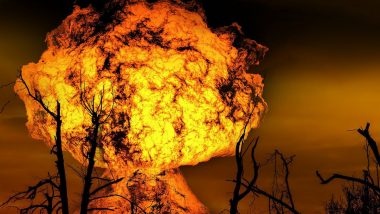 Kunduz, April 22: A blast occurred in the mosque of Afghanistan's Imam Sahib district of Kunduz, killing at least 33 people including children and 43 wounded, Zabiullah Mujahid, a spokesman for the Taliban said.

"At least 33 people including children were killed and 43 were wounded in the mosque attack in the Imam Sahib district of Kunduz, Islamic Emirate spokesman Zabiullah Mujahid said on Twitter. Condemning the attack, he said efforts are ongoing to bring the perpetrators to justice," TOLOnews reported.

A blast took place on Friday at the Mawlawi Sekandar Mosque in the Imam Sahib district of northern Kunduz province in Afghanistan. Hafiz Omar, police chief of Imam Sahib district of Kunduz, said that this afternoon a blast took place at the Mawlawi Sikandar Mosque in the district, TOLOnews reported. Indonesia to Ban Exports of Cooking Oil and Raw Materials to Reduce Domestic Shortages.

Earlier, security sources and eyewitnesses said that over 30 people were killed and injured in the incident, TOLOnews reported. The victims were taken to the district hospital. Since the Taliban took control of Afghanistan, blasts and attacks have become a regular affair.