Amid tensions between the Taliban and Pakistan, Afghans are dying at Spin Boldak after Islamabad restricted entry at the key international intersection only to Pakistani or Kandahar identification cardholders. 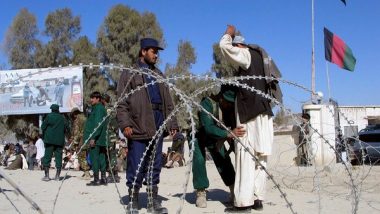 Security personnel frisking a man in the southern border town of Spin Boldak, near the Pakistani border. (Photo Credit - Reuters)

Islamabad [Pakistan] September 24 (ANI): Amid tensions between the Taliban and Pakistan, Afghans are dying at Spin Boldak after Islamabad restricted entry at the key international intersection only to Pakistani or Kandahar identification cardholders.

Earlier this month, a rush toward the entry checkpoint of the Pakistan border resulted in the death of at least one person. However, those patrolling the boundary on the Afghan side claim that over the past week, several people have perished from dehydration and heatstroke and because they could not access life-saving medical care in the Chaman district.

"Three months ago, I went to see a doctor there [Pakistan], and the doctor has asked me to return to carry out an operation," said a woman witness, "But they are not allowing us."

While another said: "It is very difficult; they [Pakistan] are allowing no one in. They don't accept the Afghan National ID [Tazkira]."

In recent weeks, Islamabad restricted entry at the key international intersection only to Pakistani or Kandahar identification cardholders. However, as per the accounts of those stranded on the Afghan side, the gates have been sealed to almost everyone.

According to New York Post, trucks remain backed up for miles, their perishable goods rotting under the brutal September sun. Entire families, starved and afraid as Afghanistan falls into a grave economic crisis, sleep on mounds of earth for multiple nights -- rising in the early morning to make the fruitless trek to the fortified checkpoint, only to be turned away.

The area has become a "military zone" over the past several days, according to the Taliban police officials who now patrol the overstuffed space.

"Pakistan is creating problems. We have an understanding with Pakistan to allow Kandahar people to cross into Pakistan. In return, people from Chaman and Quetta can enter Afghanistan using National IDs," said Mohammad Sadiq Sabery, authority in charge of the border area in Kandahar.

Many public services including those in the health sector have halted operations, New York Post said.

Meanwhile, the Taliban are calling on Pakistan to open the border at the very least on urgent humanitarian grounds.

The publication added that Pakistan has contended it has by far taken the highest number of Afghan refugees over the two-decade war. As per Islamabad figures, the country is currently home to some 1.4 million registered refugees and an estimated 2 million more who are undocumented.

The government has repeatedly said it cannot take in more refugees, explaining that it has to put its own national security interests first.

The United Nations estimates that almost 10,000 refugees arrived in Pakistan since mid-August, when the Taliban -- officially termed the Islamic Emirate of Afghanistan -- took over the Presidential Palace, securing control of the embattled country.

While, some stranded people said that some families were forced to pay between 5,000 and 6,000 rupees to smugglers to smuggle them to Pakistan, reported Pajhwok Afghan News.

The Spin Boldak commissioner told Pajhwok Afghan News that the closure of some roads and ports in the country by Pakistan had led to more congestion on the Spin Boldak-Chaman road than ever before. (ANI)