AstraZeneca said Thursday that it is withdrawing its application for approval of its COVID-19 vaccine in Switzerland because the country's medical regulator wanted to restrict its use to people over age 50. 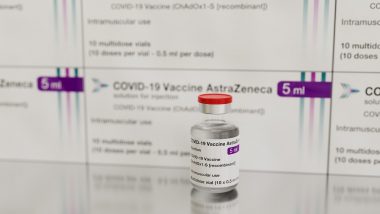 Berlin, November 4: AstraZeneca said Thursday that it is withdrawing its application for approval of its COVID-19 vaccine in Switzerland because the country's medical regulator wanted to restrict its use to people over age 50.

Switzerland has cleared the BioNTech-Pfizer, Moderna and Johnson & Johnson vaccines for use. However, national medical regulator Swissmedic hadn't yet granted marketing authorization for the AstraZeneca vaccine. Also Read | China's Western Theatre Command Oriented Towards Responding to Conflict With India.

The British-Swedish pharmaceutical company said that, since it started rolling submissions for authorization in Switzerland in October 2020, it “has been in close communication with the regulator and has continuously provided the requested study results and other pertinent information and documents.” Also Read | Diwali 2021: US President Joe Biden Extends Greetings to People on Deepavali.

AstraZeneca said it has now “decided not to pursue the marketing authorization for its COVID-19 vaccine in Switzerland. This decision is based on Swissmedic's requirement to restrict the indication to people 50 years and above.”

Swissmedic acknowledged AstraZeneca's decision in a brief statement. “This means that there are currently no new authorization applications pending for COVID-19 vaccines in Switzerland,” it said.

Switzerland is not a member of the European Union, whose medical regulator approved the AstraZeneca vaccine earlier this year. Authorities in some European countries later recommended that it be used primarily in older age groups after it was linked to extremely rare blood clots, mostly in younger people.

AstraZeneca noted in its statement that “there are established treatment protocols for the optimal management” of such cases and that its COVID-19 vaccine has been granted a conditional marketing or emergency use authorisation in more than 80 countries.

The vaccine “is generally well tolerated in adults 18 years and above” and “has been shown to be effective against all severities of COVID-19, across current variants of concern and all adult age groups,” the company said.

The AstraZeneca vaccine hasn't yet been approved for use in the United States. The drugmaker said in July that it had decided to ask the U.S. Food and Drug Administration for full regulatory approval, rather than the fast-track emergency use authorisation originally anticipated.