US President Joe Biden called the January 6 attack on the Capitol an "existential crisis," stressing that while American democracy survived, "the struggle is far from over." 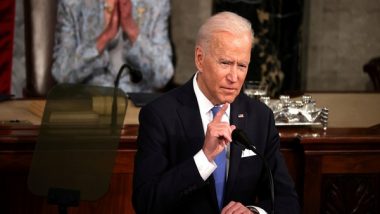 Washington, April 29: US President Joe Biden called the January 6 attack on the Capitol an "existential crisis," stressing that while American democracy survived, "the struggle is far from over."

On January 6, a group of supporters of Trump entered the Capitol to protest lawmakers accepting electoral college votes from US states that Trump has claimed were illegal and robbed him of election victory. Congress' work to verity President Biden's victory was interrupted for several hours during the incident. US Capitol Riots: Two Arrested and Charged For Assaulting Police Officer Brian Sicknick, Who Died During the January 6 Riot.

"As we gather here tonight, the images of a violent mob assaulting this Capitol--desecrating our democracy--remain vivid in our minds. Lives were put at risk. Lives were lost. Extraordinary courage was summoned. The insurrection was an existential crisis--a test of whether our democracy could survive. It did," he said during his first joint address to Congress.

His speech comes after Capitol Police said continued heightened security at the Capitol was necessary due to intelligence that some militia groups that attacked the Capitol threatened to "blow up" the complex during the joint address.

Biden noted that adversaries "are betting we can't" overcome the divisions that led to the attack.

"Can our democracy overcome the lies, anger, hate and fears that have pulled us apart? America's adversaries - the autocrats of the world - are betting it can't. They believe we are too full of anger and division and rage. They look at the images of the mob that assaulted this Capitol as proof that the sun is setting on American democracy. They are wrong. And we have to prove them wrong," he said.

The address was given to a sparse audience compared with past years, largely due to the pandemic.

The Hill reported that the US Justice Department has charged more than 400 people in connection with the riot, with investigators largely zeroing in on extremist groups like the Oath Keepers.

Shortly after the Biden administration was sworn in, the Department of Homeland Security issued a bulletin warning extremist groups continued to post an elevated threat, as reported by The Hill.

"DHS is concerned these same drivers to violence will remain through early 2021 and some DVEs may be emboldened by the January 6, 2021 breach of the U.S. Capitol Building in Washington, D.C. to target elected officials and government facilities," the agency wrote using shorthand for domestic violent extremists.

Biden also said that white supremacist terrorism represents the most lethal threat to the US homeland, according to the text of his speech before the joint session of Congress provided in advance by the White House.

"We won't ignore what our own intelligence agencies have determined - the most lethal terrorist threat to the homeland today is from white supremacist terrorism. And my fellow Americans, we must come together to heal the soul of this nation," he said.