US President Joe Biden Warns Americans in Ukraine to Leave the Country, Says Sending Troops to Evacuate Would Be 'World War'

On January 23, the State Department authorized the evacuation of US diplomats' family members and of direct-hire employees. The State Department also recommended that US citizens who were present in Ukraine should consider departing right away due to the unpredictable security situation. 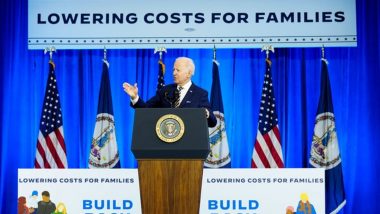 Washington, February 11: US President Joe Biden warned Americans in Ukraine to leave the country immediately amid tensions between Moscow and Kiev, saying that sending US troops for an evacuation would mean "world war".

"American citizens should leave now," Biden said during an interview with NBC News.

"It's not like we're dealing with a terrorist organization. We're dealing with one of the largest armies in the world. It's a very different situation and things could go crazy quickly," he said, according to NBC News.

Asked about what scenario would require US troops to enter Ukraine to evacuate Americans, Biden responded: "There's not. That's a world war when Americans and Russia start shooting at one another." US Urges Americans in Ukraine to Leave Country: State Dept.

Meanwhile, the US State Department has issued a new advisory urging Americans in Ukraine to leave the country at the earliest possibility, strengthening earlier warnings that urged its citizens to "consider" such action.

"Do not travel to Ukraine due to the increased threats of Russian military action and COVID-19; those in Ukraine should depart now via commercial or private means. If remaining in Ukraine, exercise increased caution due to crime, civil unrest, and potential combat operations should Russia take military action. Some areas have increased risk," the advisory said on Thursday (local time).

On January 23, the State Department authorized the evacuation of US diplomats' family members and of direct-hire employees. The State Department also recommended that US citizens who were present in Ukraine should consider departing right away due to the unpredictable security situation. Ukraine Says No Breakthrough with Russia but Both Sides Agree to Keep Talking.

Meanwhile, the first group of American soldiers from the 82nd Airborne Division arrived in Poland on February 5 following Pentagon Press Secretary John Kirby's announcement about 1,700 additional troops from the United

States to be sent to the country, Polish media reported. Earlier, Kirby said that the US will temporarily deploy additional forces to Europe amid escalating tensions with Russia. The deployment includes 1,700 soldiers to be sent to Poland and 1,000 US personnel based in Germany will be relocated to Romania and another 8,500 troops will "remain ready to move if called for the NATO response force," Kirby had said.