Get latest articles and stories on World at LatestLY. China has been involved in poaching and siphoning talent from the West, a so-called "global recruitment strategy", to produce faster results in strengthening the country's economy and workforce and aggressively replace America's global leadership. 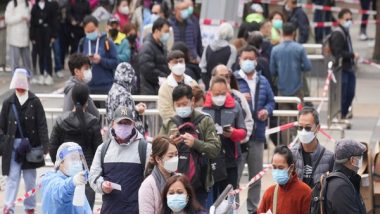 Beijing [China], May 14 (ANI): China has been involved in poaching and siphoning talent from the West, a so-called "global recruitment strategy", to produce faster results in strengthening the country's economy and workforce and aggressively replace America's global leadership.

The grave danger of Chinese President Xi Jinping's strategy aims to reshape the global talent recruitment and retention landscape to achieve its ultimate goal of world dominance, reported The Hill.

If China succeeds, talent recruited from the US and other Western countries will provide not only a sustained technology transfer but also disruptive innovations that will enable China to surpass the US economically, technologically, and militarily.

In view of this, the US must be cautious of this Chinese strategy and the Joe Biden administration should formulate a more effective talent strategy, including adopting a more targeted immigration policy that appeals to the world's best and brightest minds.

This strategy has been in place for a long time. In the 1950s the Chinese Communist Party (CCP) has been successful in luring hundreds of scientists from the West to return to China. These scientists built China's atomic bomb in 1964 and the hydrogen bomb in 1967. In 1970, they helped launch China's first satellite into space.

In a similar move to China's infamous so-called "global recruitment strategy", in 1999, CCP awarded national medals for the "Two Bombs, One Satellite" project to 23 individuals who made significant contributions to the program.

Beijing over the years has devised more than 200 talent recruitment plans, including the notorious Thousand Talents Program (TTP).

The US expressed its concerns over the illicit transfer of American technology, intellectual property, and know-how to China. However, China continued to implement this strategy to make itself a world power with a desire to dominate others, especially the US, economically and technologically. (ANI)