Get latest articles and stories on World at LatestLY. China's state-owned COSCO Shipping Corporation Ltd, the fourth-biggest player in the shipping industry, according to London-based data analytics company GlobalData, is increasingly expanding its operations throughout the world even as it conceals its association with the People's Liberation Army Navy (PLAN), a media report said. 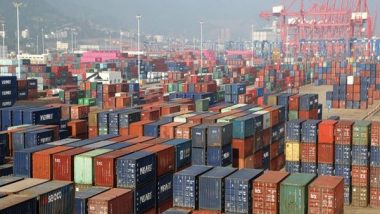 Beijing [China], May 14 (ANI): China's state-owned COSCO Shipping Corporation Ltd, the fourth-biggest player in the shipping industry, according to London-based data analytics company GlobalData, is increasingly expanding its operations throughout the world even as it conceals its association with the People's Liberation Army Navy (PLAN), a media report said.

This singular fact shows the pressure on state-owned COSCO, as it is commonly known, to navigate the new era in which the world finds itself, the report said, adding, that it must steer a perilous course through Beijing's growing confrontations with developed democracies, while still serving an era of global trade in which China is central to both supply chains and demand.

At the same time, the People's Liberation Army (PLA) is mounting the biggest peacetime naval buildup the world has ever seen, involving the private sector in an effort that Beijing brands "military-civil fusion."

As of March of this year, COSCO Shipping owned and operated more than 400 container vessels in and out of 558 ports worldwide, according to group websites, along with hundreds more tankers and other vessels. Its ports subsidiary is now among the world's top three largest port operators, Asia Nikkei reported.

China's navy may only have one base abroad, in Djibouti on the Horn of Africa, but replenishment and other logistical support are in theory available wherever COSCO operates, the report said.

In 2019, China's defence ministry heralded the successful resupplying of the PLA Navy frigate Linyi by the Hong Kong-flagged COSCO container ship Fuzhou. Known as underway replenishment, the successful test was a "breakthrough" in enabling the Chinese navy to push out into the high seas, the report said citing a ministry statement.

COSCO and its subsidiaries maintain relationships with various entities within China's defence-industrial establishment including, for example, receiving high-level visits from members of the Central Military Commission, the report further said.

However, despite COSCO's closeness to the Chinese military, Taiwan's government allows it to ship to and from Taiwanese ports.

In Asia, aside from Taiwan, the company has port holdings in Singapore and Busan in South Korea. But it is in Europe and the Middle East where most of its overseas portfolio lies, with holdings in Abu Dhabi, Egypt, Spain, the Netherlands and elsewhere, the report said.

At the heart of this web of holdings, the company's 67% stake in Greece's largest port, Piraeus, is its crown jewel -- the only port in Europe where COSCO has a controlling share of the entire port, along with 100% ownership of container terminals there, the report added.

COSCO is seeking to expand further, the report said, citing COSCO's Shipping Ports' 2021 annual report in which chairman Feng Boming said that the company "will continue to grasp the opportunities to expand its global terminal network and focus on emerging markets such as Southeast Asia, the Middle East and Africa to enhance the regional diversification of its terminal asset portfolio."

"It is remarkable how many governments around the world have given COSCO Shipping access to their critical infrastructure," said Ian Easton, senior director at the Project 2049 Institute, a think tank. "For Beijing, this represents an incredible military and intelligence success story." (ANI)