Get latest articles and stories on World at LatestLY. China has reported an alarming increase in the number of people seeking asylum abroad after Chinese President Xi Jinping came to power as the systematic misuse of power is leading to discomfort in people's minds and therefore, many are choosing to go abroad, as noted by Hong Kong Post. 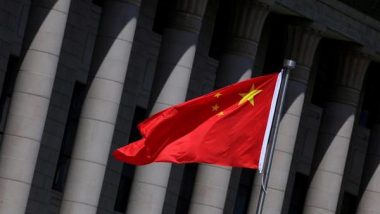 Beijing [China], July 5 (ANI): China has reported an alarming increase in the number of people seeking asylum abroad after Chinese President Xi Jinping came to power as the systematic misuse of power is leading to discomfort in people's minds and therefore, many are choosing to go abroad, as noted by Hong Kong Post.

The data analysed and published by Safeguard Defenders shows the increase in the asylum seekers, as Xi consolidated his power and introduced a more oppressive system of governance, the number of asylum-seekers from China continued to grow at an alarming rate, claims the NGO on its website.

The increase has occurred despite China's zero-covid policy and other restrictions. In total, around 730,000 Chinese nationals have sought asylum since 2012, with more than 170,000 living outside China under refugee status, the report states.

For most asylum seekers from China, the US remains the most popular destination. America accepted 88,722 applicants from mainland China in 2021, and Australia took 15,774 asylum-seekers in the same year.

Thousands also apply for asylum in Canada, Brazil, South Korea, and the UK. Researcher Jing-jie Chen, working for Safeguard Defenders said the data also reflects the impact of Xi's zero-Covid policy, which has led to gruelling lockdowns and draconian restrictions on people's movements under the guise of disease control and prevention.

China has basically been in a state of lockdown during the past couple of years. Despite the lockdowns, "...we can see that the number has reached a new high ... with the number of asylum seekers rising every year over the past three years," Chen said.

"Many people are voting with their feet and opting to emigrate from China, either through overseas study or investment visas and residency cards," he added.

The rights group 'Safeguard Defenders' is cited in an article written by Amelia Loi for Radio Free Asia in Mandarin (22 June 2022).

The rights group said, "Seeking asylum is for many a desperate act, reserved for those with few other options, which does not apply to the great many Chinese who have moved, and continue to do so, to the US, Australia, and beyond, often via naturalization, work visas or property purchases."

Reportage of human rights violations in China, calls for greater transparency and the obvious conditions prevailing within the country have led to greater repression. This allows Xi to consolidate total power in his hands.

However, while Chinese nationals are choosing to leave their country fearing oppressive rule, the risk of transnational repression has also grown, including the use of involuntary returns. This is a feature already noticed prominently in the case of Uyghurs who have fled Xinjiang and sought asylum in other countries.

Chinese law enforcement agencies routinely track, harass, threaten and repatriate people who flee China, under its SkyNet surveillance program that reaches far beyond China's borders, using a variety of means to have them forcibly repatriated.

China has also often used pliant allies to circumvent criminal justice processes and ensure political refugees and Muslims are sent back. It has targeted ethnic groups like the Uyghurs, but also political dissidents, rights activists, journalists and former officials using its overseas networks, according to a 2021 report by Safeguard Defenders.

The report stated that the CPC has a coordinated international operation called "Operation Foxhunt" to force Chinese nationals to return home. Chen notes that since Xi Jinping took over as CPC General Secretary, he has brought the 'Foxhunt' plan for the global oppression of dissidents that extends internationally.

Between the launch of the SkyNet program in 2014 and June 2021, China repatriated nearly 10,000 people from 120 countries and regions, the report said. Yet according to Safeguard Defenders, just one per cent is brought back to China using judicial procedures; more than 60 per cent are just put on a plane against their will.

Recently, China put two prominent civil rights activists, Xu Zhiyong and Ding Jiaxi through closed-door trials for state subversion, both of whom were at the forefront of NGO activity aimed at greater transparency and democracy in China.

This incident occurred at a time when UNHCR figures reveal that the number of nationals seeking asylum overseas had increased from 12,000 in 2012 to nearly 120,000 in 2021. Clearly, many Chinese nationals are having a problem with the Communist Party of China (CPC) and its way of governance. This trend became prominent after Xi Jinping took office in 2013 as the CPC General Secretary. Some observers term this as a desperate act, Hong Kong Post reported.

A recent illustration of how the Chinese system puts pressure on its citizens is seen in reports of Xu Zhiyong and Ding Jiaxi, both legal experts and human rights activists through closed-door trials (June 2022) for alleged state subversion. No one was allowed to attend Xu's trial held in Shandong province and no information relating to the court proceedings was made public.

Xu, 49 is one of China's most prominent activists and human rights advocates. He was a co-founder of the now-banned legal aid centre Open Constitution Initiative and the New Citizens' Movement, a nongovernmental group advocating for civil rights, according to Human Rights Watch (HRW).

The crime Xu committed was that he said Xi Jinping is "just not smart enough." From 2014 to 2018, Xu served four years in prison for "gathering a crowd to disrupt public order" after a series of small-scale protests by members of the non-governmental New Citizens' Movement, an initiative he co-founded in 2012 to develop civil society in China within the confines of the one-party political system.

In February 2020, Xu was detained in Guangzhou after spending nearly two months in hiding. He was one of several rights activists rounded up by authorities after a private gathering in the south-eastern city of Xiamen in December 2019. At that time, Xu had issued an open letter addressed to Xi Jinping, calling on him to resign, a strikingly blunt appeal that was swiftly censored on the Chinese internet, Hong Kong Post reported.

Ding Jiaxi, 54, is a lawyer and a prominent figure within the New Citizens Movement which campaigned for greater transparency among Chinese Communist Party officials. In 2012 and 2013, he participated in a number of small protests in Beijing calling on Chinese officials to reveal their personal assets.

Earlier this month, a municipal court in Shandong issued a notice to the defence lawyer of Ding Jiaxi, inviting the lawyer to a pre-trial meeting. The notice indicated that the case of Ding Jiaxi, who is charged with "subversion of state power", involves "a large amount of evidentiary materials" and is "major and complicated".

Gwen Lee of Amnesty International sums up the situation aptly when he says, "The Chinese authorities have targeted Xu Zhiyong and Ding Jiaxi not because they committed any internationally recognized crime, but simply because they hold views the government does not like." (ANI)