Get latest articles and stories on World at LatestLY. Prime Minister Narendra Modi will pay a visit to Lumbini, Nepal, on Monday on the occasion of Buddha Purnima. At Lumbini, Prime Minister will offer prayers at the sacred Mayadevi temple and, separately, participate in the Shilanayas (foundation laying) ceremony of a Centre for Buddhist Culture and Heritage to be built with Indian assistance. 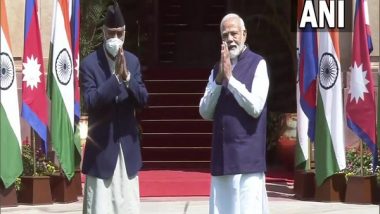 Kathmandu [Nepal], May 13 (ANI): Prime Minister Narendra Modi will pay a visit to Lumbini, Nepal, on Monday on the occasion of Buddha Purnima. At Lumbini, Prime Minister will offer prayers at the sacred Mayadevi temple and, separately, participate in the Shilanayas (foundation laying) ceremony of a Centre for Buddhist Culture and Heritage to be built with Indian assistance.

PM Modi's visit to Lumbini at the invitation of Prime Minister Deuba underscores the shared civilisational and cultural heritage of the people of both the countries and will further deepen the bilateral relations.

Modi is said to be using soft power diplomacy by visiting Nepal at a time when the geopolitical dynamics are rapidly changing and even Nepal has witnessed a division of opinion on issues like MCC and BRI. Nevertheless, the visit offers an immense opportunity for Nepal.

Tourism is the mainstay of the Nepalese economy and religious tourism is one of the main contributors to the Nepalese tourism industry. Not only has it generated thousands of jobs, but, has also promoted Nepalese culture, lifestyle and traditions. Nepal has a lot to offer to tourists, from the high Himalayas to the jungles of the Tarai plains teeming with wildlife, and, from the scenic grandeur of its rolling hills to the rich cultural heritage of its inhabitants. Yet tourism has not been able to make a sizeable contribution to its gross domestic product (GDP). As against Nepal, Tanzania, for instance, draws tourists in much greater numbers to its game safaris and Mount Kilimanjaro, raking in a remarkable USD 2.5 billion annually.

If Nepal is seeking to make it big in tourism, then the business-as-usual approach to luring tourists is not going to make much headway. There is a need to explore every avenue possible and not limit tourism to mountaineering, trekking and cultural tours. It is in this backdrop that Buddhist Religious Tourism assumes significance.

The Asia-Pacific region has seen significant growth in international tourist inflows. It is estimated that out of the 600 million religious and spiritual voyages undertaken worldwide, 50 per cent are Asia bound. Amongst religions, Buddhism has the maximum potential for attracting tourists from abroad since 97 per cent of the world's Buddhists are concentrated in East and Southeast Asia.

Owing to civilisational contact of over two millennia, India and South-East Asia share many complementarities in religion and culture, as seen in language, lifestyle, food, art, and architecture. Thus, India's soft power perhaps has greater resonance with Southeast Asia.

Against this backdrop, India is promoting the Transnational Buddhist Circuit covering India and Nepal to improve footfall. A tourist circuit is defined as a route with at least three major tourist destinations that are distinct and apart, with well-defined entry and exit points. It could be limited to a state or region or be transnational. The transnational nature of the Buddhist Circuit necessitates a greater level of coordination between India and Nepal.

Lumbini, Buddha's birthplace, is an inalienable part of the circuit following the life story of Buddha. Improving connectivity between Lumbini and other destinations in the transnational circuit is important. The proposed Lumbini-Kushinagar rail link will be crucial in this respect.

India is making a significant investment in infrastructure to implement the Buddhist religious circuit. Investment is directed towards connectivity, addressing the paucity of hotels and also issues of cleanliness and safety, as well as creating amenities along the stretch of the transnational circuit.

Greater cooperation between India and Nepal needs to focus on joint promotion and marketing, capacity building in the tourism industry, development and sharing of industry standards, and common branding and development of Buddhism religious tourism products. This may require setting common tourism standards and the formulation of a common marketing strategy such as the creation of a brand, to develop a common website for promotion etc.

Hence the interdependence between India and Nepal for religious tourism through the transnational Buddhist circuit will be a driver not only for economic growth but also for bilateral relations. (ANI)