Get latest articles and stories on World at LatestLY. Islamabad High Court on Monday ordered Pakistan Prime Minister Shehbaz Sharif to ensure that the missing persons whose cases are being heard in the court should be produced in the next hearing on September 9, warning that in case of failure, he should appear in person to give an explanation, reported local media. 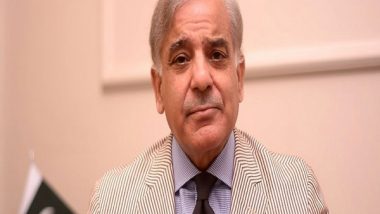 Islamabad [Pakistan], July 5 (ANI): Islamabad High Court on Monday ordered Pakistan Prime Minister Shehbaz Sharif to ensure that the missing persons whose cases are being heard in the court should be produced in the next hearing on September 9, warning that in case of failure, he should appear in person to give an explanation, reported local media.

IHC Chief Justice Athar Minallah issued the summon to the Pakistan Prime Minister while hearing the missing persons' case related to the disappearance of journalist Mudassar Mahmood Naro and five others.

According to the Dawn newspaper, Chief Justice Athar Minallah during the Monday hearing said, "The prime minister should ensure that the missing citizens named in the petitions were produced before the court on the next hearing, adding that in case of a failure, the premier should appear in person to justify 'the failure of the state to fulfil its constitutional obligations'."

The court remarked that PM Shehbaz was expected to inform the court regarding actions taken against public functionaries who had been or continue to be involved "in the most inhuman and heinous phenomenon of enforced disappearances".

"The prime minister is further expected to demonstrably establish that the phenomenon of enforced disappearances is not an undeclared policy of the state," Justice Minallah noted.

Justice Minallah asked Deputy Attorney General (DAG) Khawaja Imtiaz reasons for the government failing to comply with the court order regarding the recovery of missing persons.

"It is noted that the existence of the grave phenomenon of enforced disappearances and impunity against it has never been denied but the state, through the federal government, has so far failed to dispel the impression that it is an undeclared policy," the court noted.

On June 25, Islamabad High Court, while hearing a petition in the case sought a report regarding the implementation of their production orders and said that the commission has failed to discharge its duties, the Dawn reported.

Minallah remarked that prima facie the commission has failed to discharge its duties. "We have repeatedly said the enforced disappearances are a heinous crime and a sheer violation of the fundamental rights laid down in the Constitution," he added.

In the last hearing on June 17, CJ Minallah warned that the court could summon the chief executive of the country for an explanation over the government's failure to implement the court orders.

On May 29, the court had issued an order wherein it had asked the federal government to serve notices on former president retired Gen Pervez Musharraf and all successive chief executives, including Imran Khan and incumbent PM Shehbaz, for following an "undeclared tacit approval of the policy regarding enforced disappearances".

The issue of forced disappearance in Pakistan originated during the Musharraf era (1999 to 2008), but the practice continued during subsequent governments.

Human rights activists allege that the law enforcement agencies in Pakistan are responsible for the cases of forced disappearance in the country.

Enforced disappearances are used as a tool by Pakistani authorities to terrorize people who question the all-powerful army establishment of the country, or seek individual or social rights.

Cases of enforced disappearances have been majorly recorded in the Balochistan and the Khyber-Pakhtunkhwa provinces of the country. (ANI)